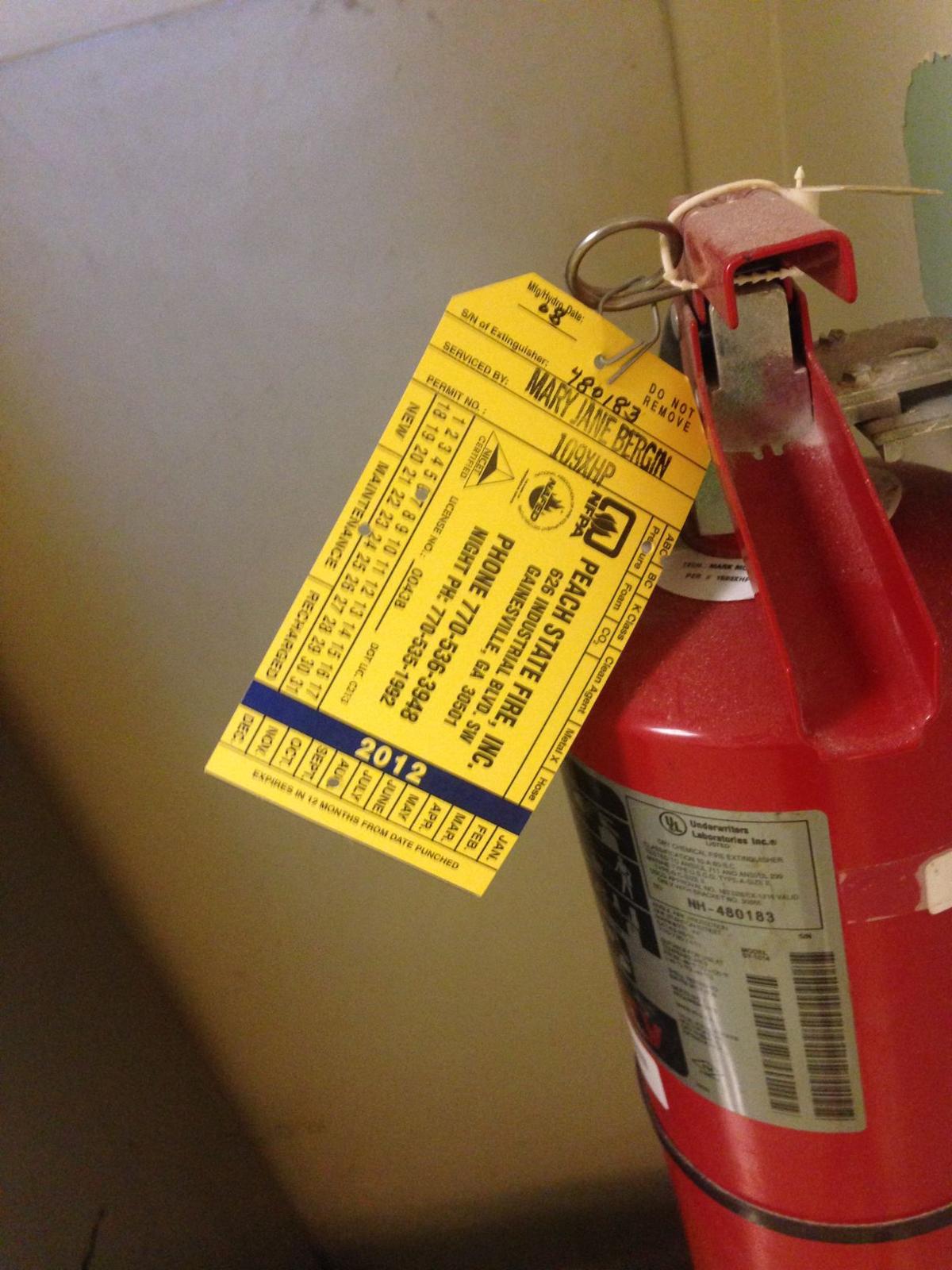 Fire extinguisher inspections continue on campus; however, a few are being overlooked. The Office of Fire Safety will transfer to a new electronic system to keep track of the 8,000 canisters on-campus. STAFF. 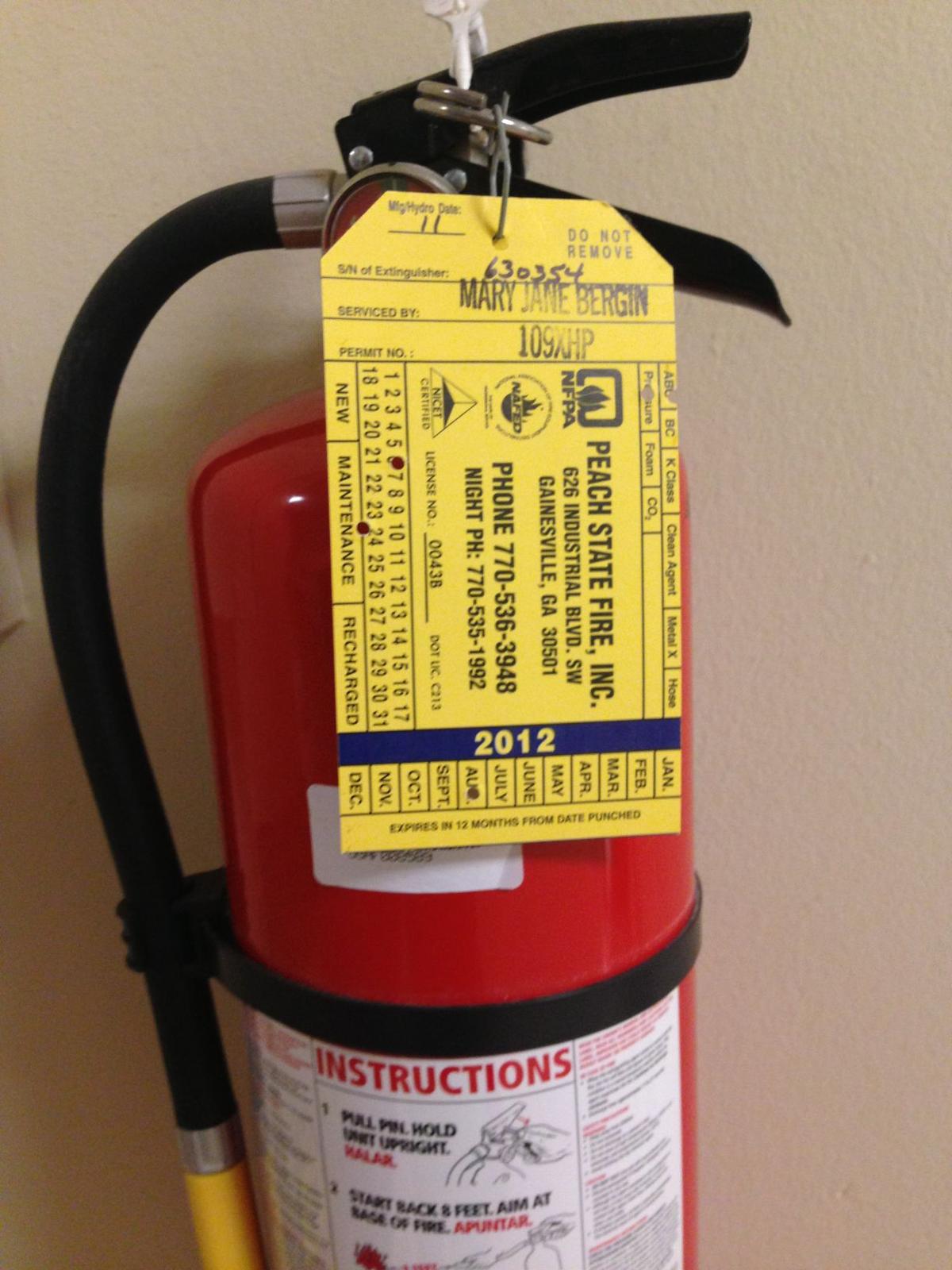 This extinguisher, found in Park Hall, has gone without an inspection since 2012. STAFF 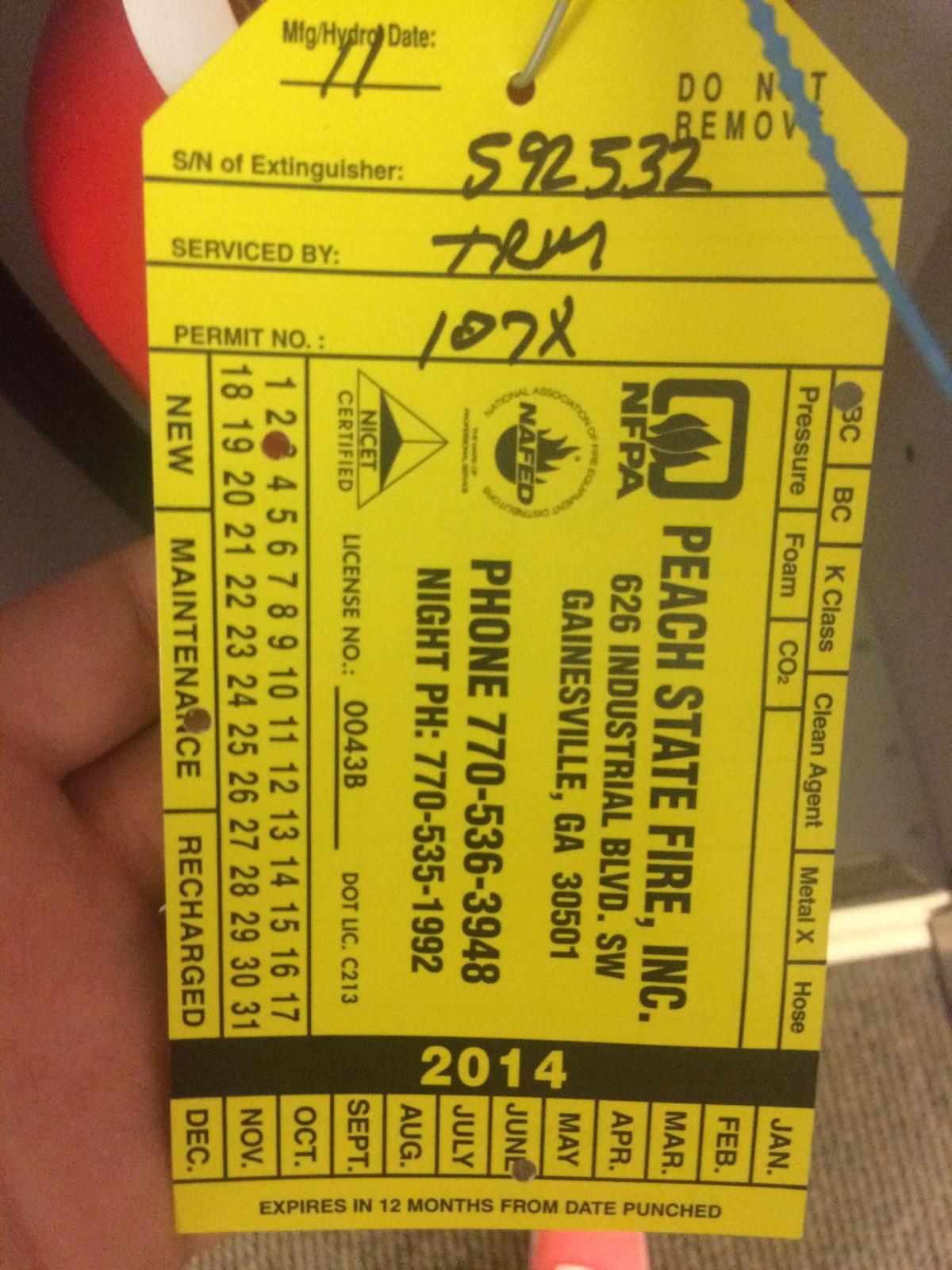 Other extinguishers were inspected last year. Some of them are overdue for the next check-up by a month. STAFF. 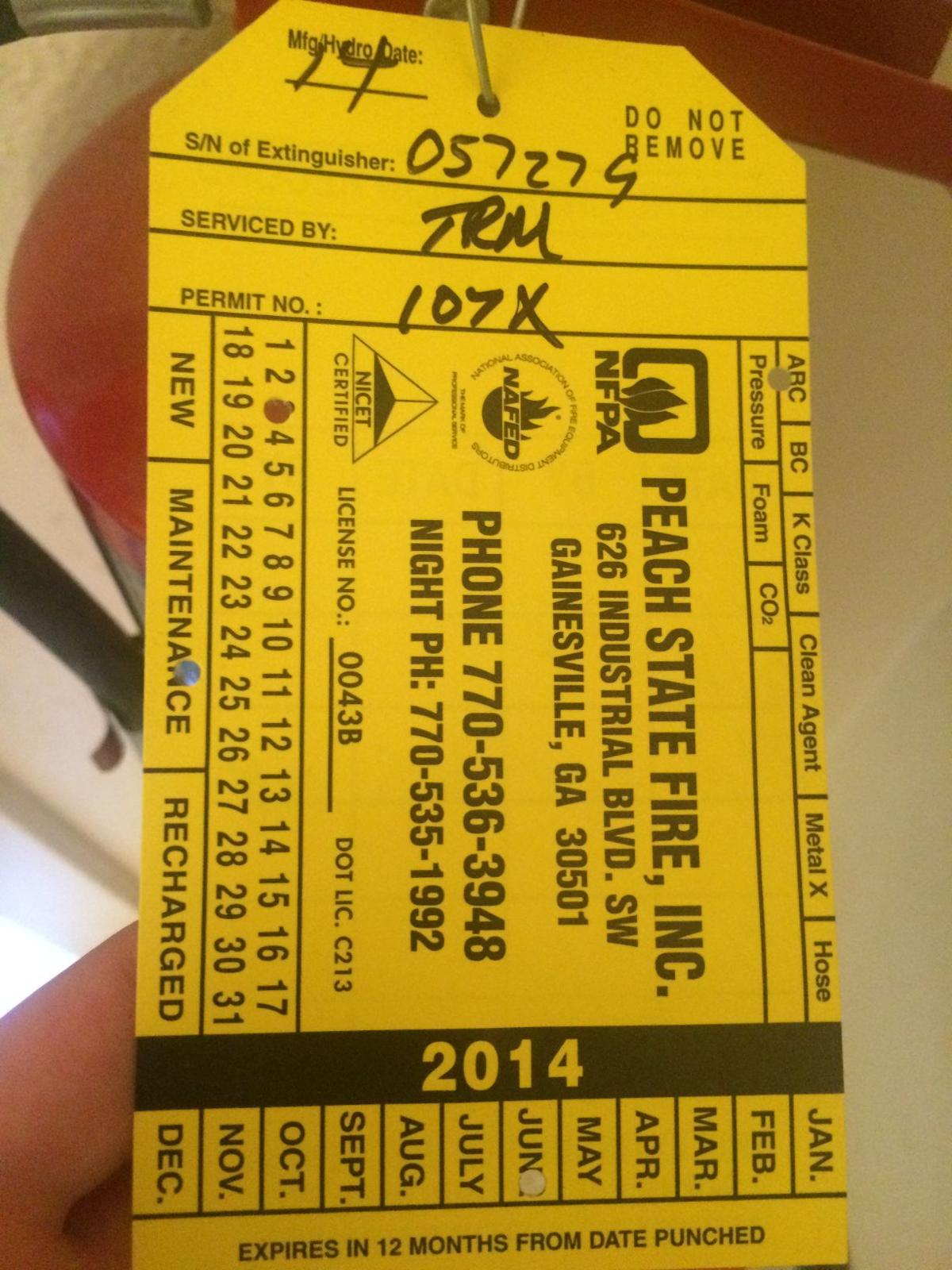 Fire extinguisher inspections continue on campus; however, a few are being overlooked. The Office of Fire Safety will transfer to a new electronic system to keep track of the 8,000 canisters on-campus. STAFF.

This extinguisher, found in Park Hall, has gone without an inspection since 2012. STAFF

Other extinguishers were inspected last year. Some of them are overdue for the next check-up by a month. STAFF.

Last year, The Red & Black investigated expired fire extinguishers at the University of Georgia. In lab buildings across campus, 35 extinguishers were found to be out-of-date – a dangerous situation for laboratories that frequently experience chemical spills or other accidents.

While the situation has improved considerably in the intervening time, a handful of extinguishers remain expired, some by as much as three years.

Fire extinguishers on-campus are maintained by contractors hired by The University of Georgia Environmental Safety Division and aided by the university’s Office of Fire Safety.

John McCollum, associate vice president of the Environmental Safety Division, was present last year when the extinguishers were found to be out of date. His office responded to the initial situation quickly.

“[Last year] we had had contractual issues, with [contractors] Peachstate,” McCollum said. “Our contract calls for them to go around on an annual basis to every fire extinguisher, which includes checking it to make sure the hoses are in good shape and it’s properly pressurized.”

McCollum said that Peachstate, if they find an extinguisher not in working order, will replace the extinguisher while they remove the defective one to be repaired.

Since last year, Fire Safety Manager Russell Dukes and his team worked to remedy the oversight, and they have since seen a noticeable improvement.

“We got the contract straightened out,” Dukes said. “Peachstate did a big search last year to try to get caught up and got everything done. Now we’re trying to get everything back to a normal routine again.”

This year, the Red & Black investigated 73 fire extinguishers on-campus and found 22 to be out of date. In locations such as the Old College, Biological Sciences, Geography and Geology, and Miller Learning Center buildings, extinguishers had gone a year and anywhere from one to two months without an inspection.

Park Hall, the home of UGA’s Department of English, had a handful of extinguishers that hadn’t been inspected since 2012 - a gap of three years in between inspections.

Rachel Newell, a third year English major from Alpharetta, said that the expired fire extinguishers in the building where she has many of her classes make her somewhat nervous.

Fire extinguishers on-campus and elsewhere are investigated on a yearly basis because, after a year, it is a gamble whether or not the canister will put out a fire or not. A simple malfunction can quickly turn fatal, especially in buildings containing hazardous materials. 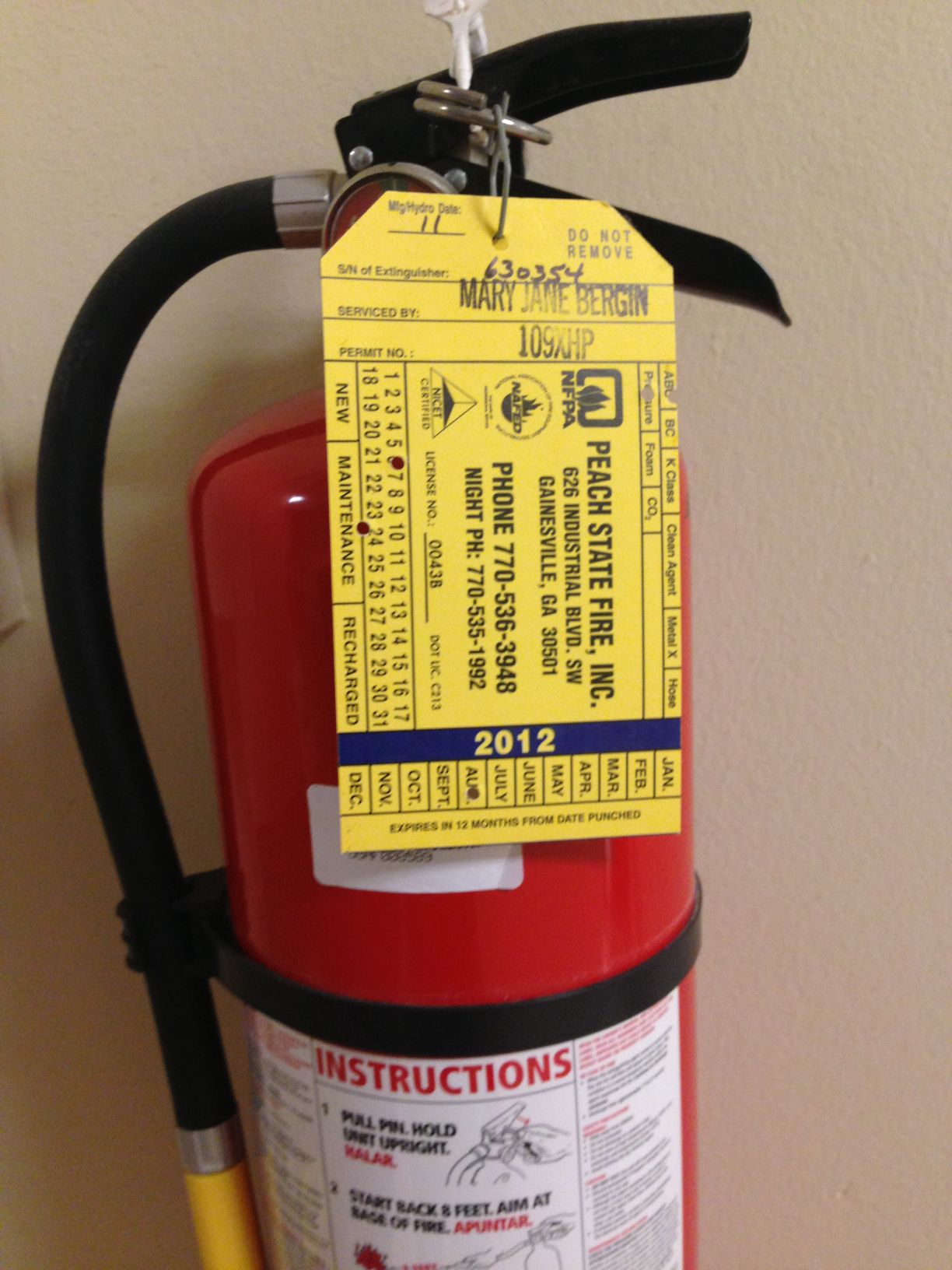 “When an extinguisher is inspected, it’s good for a year from that date,” Dukes said. “We have a normal rotation that Peachstate does. It’s hard to get it the same day and date, because calendars change, but we try to get to it within 30 days.”

McCollum and the division are working to implement an electronic database to keep track of an excess of 8,000 extinguishers at UGA to be ready sometime in the next year.

“Our IT staff has been working for the past few months on a much more up-to-date electronic system that would allow us to track those extinguishers,” McCollum said. “[The electronic system] will standardize those inspections and help us to get around campus more often.”

When told of the remaining expired extinguishers, McCollum explained that even the smallest lapse is a breach in the contract with Peachstate.

“That would be a concern for us,” McCollum said. “A month behind should not happen, it would definitely not meet their contract obligations.”

Contracts for inspections like these are given to a contractor for a year with the option to renew.

“There’s an element of evaluation there to make sure [the contractor] is capable of doing the work at that price,” said Claire Boyd, assistant procurement officer for UGA. “You need to have been in business for a certain amount of time, and you need to have clients who you’re performing the same size and scope of work for.”

A missed inspection date does not necessarily result in a defective extinguisher, but there could be other factors for the user to consider.

“If it’s past its annual inspection date, it doesn’t mean the extinguisher isn’t going to work,” Dukes said. “It just means it’s due for inspection. They’ll still work unless there’s been some damage to it.”

Concerning Park Hall’s extinguishers going without an inspection since 2012, McCollum was adamant that there was no excuse for the lapse.

“That certainly would never be acceptable under any circumstance. When it’s that old, we’d like to check those out,” McCollum said.

For Dukes, the Park Hall extinguishers were likely a database error.

“That will happen occasionally, where one might get dropped from the computer system and it’s not on any inspection list,” Dukes said, adding that when canisters like these are discovered, they can be quickly replaced.

“We certainly depend on other eyes and ears to help us find those [out-of-date extinguishers],” McCollum said.

Dukes stressed the team effort that goes toward managing so many extinguishers.

“Everybody is working really hard to do this, and it may not be perfect, but for the most part everybody is getting their work done,” Dukes said.

Playing with fire?: Some extinguishers left expired for nearly one year until reported

The same day The Red & Black published an article detailing the extent of expired fire extinguishers on campus, the division found a way to pay to make them up to date again.

Our take: No excuse for oversight in fire safety on campus

The truth is that a large number of fire extinguishers on UGA’s campus are past their date for inspection, according to an article published by the Red & Black on Tuesday.

A fire broke out in the kitchen at Bolton Dining Hall Monday around 7:45 p.m.

When there is an emergency on campus students are quick to jump on Twitter, Facebook or other forms of social media to get the quickest run do…