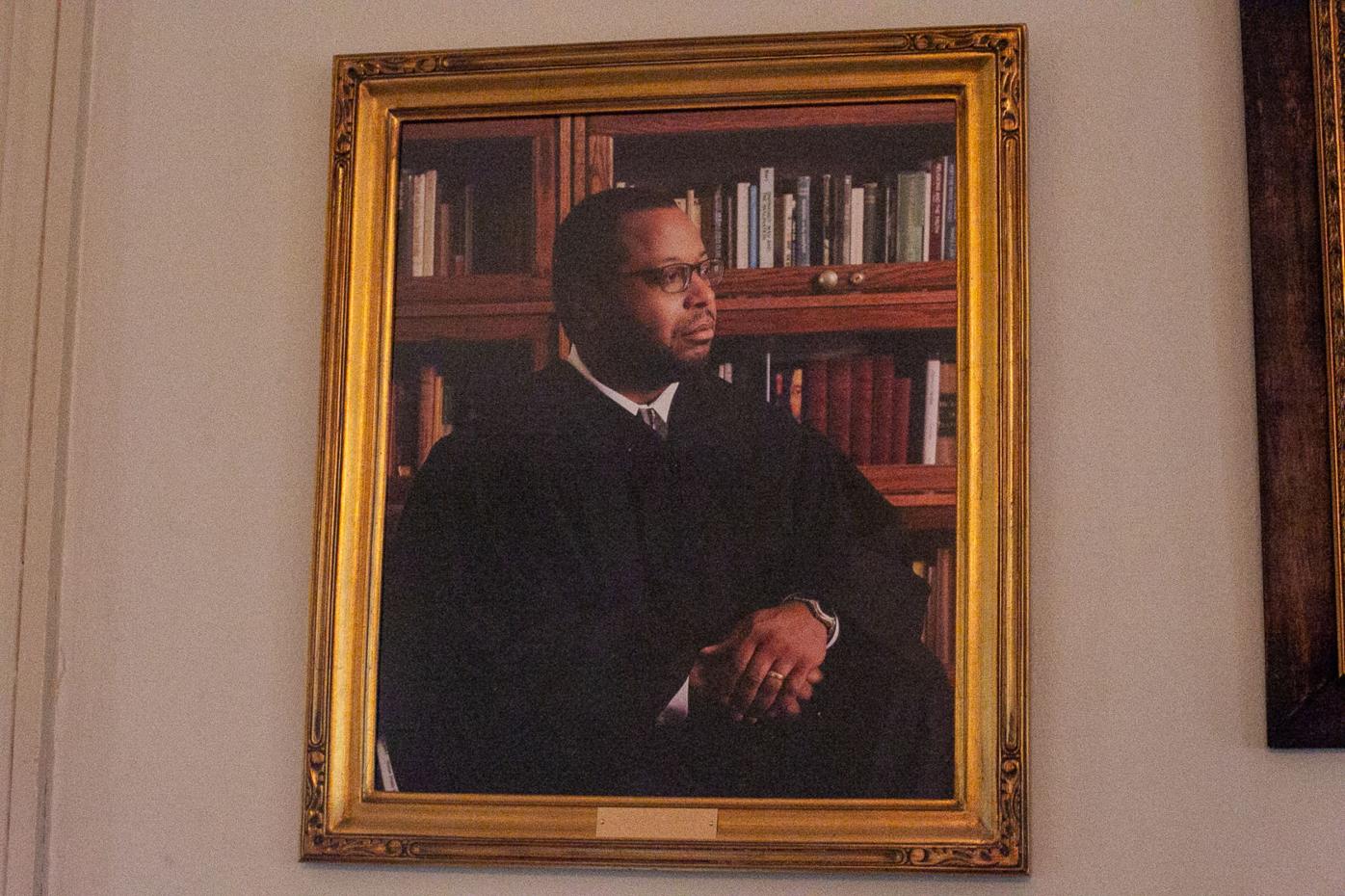 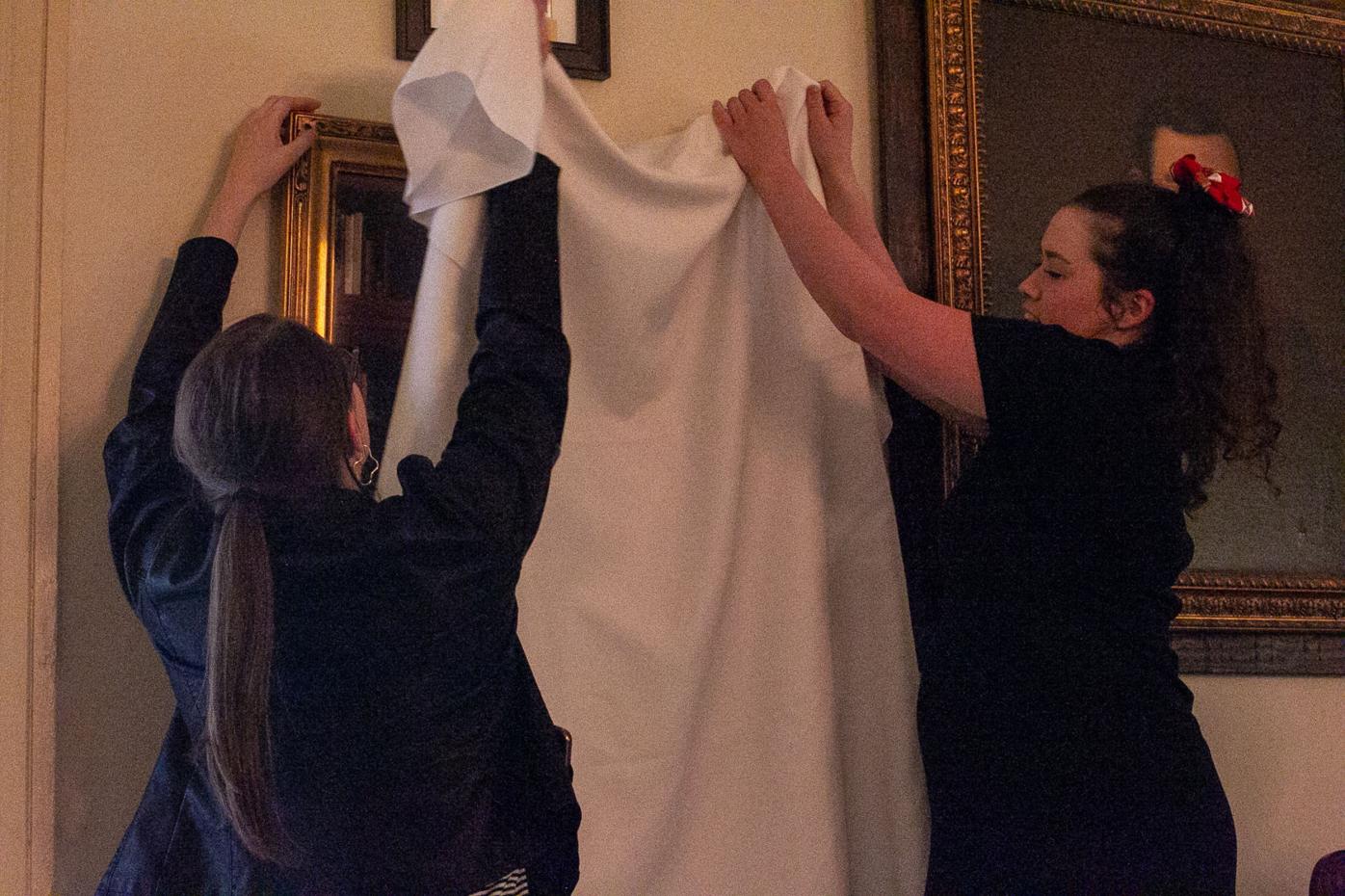 Jess Brown, left, and a member of Phi Kappa unveil a portrait of Jeffery Monroe on Apr. 19, 2019 at the Phi Kappa Hall. (Photo/Foster Steinbeck)

Jess Brown, left, and a member of Phi Kappa unveil a portrait of Jeffery Monroe on Apr. 19, 2019 at the Phi Kappa Hall. (Photo/Foster Steinbeck)

In the fusty, historic chambers of Phi Kappa Hall sits an angular sheet ghost in the shape of a square.

When the white sheet is dramatically pulled off, what remains is a man framed in gold. He looks stoic—dressed in his judge robe, looking far into the distance with a wall of books behind him. His photograph is fitting among the other portraiture in the hall—arbitrarily-placed, some lopsided and with mismatched frames.

When applause begins to bellow in the chambers, someone calls out from the back of the room: “Here, here!”

The first major portrait hanging since the mid-2000s, the commissioning is an effort by the society to address the problem of not seeing enough women and people of color hung in the Phi Kappa Hall and to “continue a trend of recognizing siblings from the refounding of Phi Kappa onward,” Jess Brown, alumni secretary and junior history major said.

The society originally passed a resolution to commission a photograph of Monroe and hang it in the hall in 2015, but constant scheduling conflicts and the semesterly turnover of the society’s officers delayed the process until December 2018, when Brown picked up the torch and created a GoFundMe for the project. Four months later, the society surpassed their initial goal of $350.

Monroe has a big reputation in Phi Kappa.

In addition to serving as the society’s first African-American president during the winter quarter of 1996, Monroe won two intersociety debate titles and was awarded the Phi Kappa Speaker’s Key upon graduation, the highest honor awarded by the society.

Since graduating from the UGA School of Law in 2000, Monroe has enjoyed a long legal career, serving as president of the Macon Bar Association and as a member of the Board of Governors of the State Bar of Georgia, among other roles. He was most recently appointed as the new Bibb County State Court judge in 2017.

“When you walk into the hall, there’s a certain type of person you see,” Brown said. “Monroe is the perfect representation of what it means to be a part of Phi Kappa.”

Although Monroe was not in attendance himself, alumus T. Kyle King stepped up to the lectern after the unveiling to speak in his honor.

What came out was a poem structured much like Edgar Allan Poe’s “The Raven,” of which Monroe had a reputation for regularly reciting at post-debate orations.

“Four years ago this fall / A vote was made in this hall / To place a portrait on the wall / That there deservedly would go / Alongside these honored pictures of many a famous sis and bro / Brother Monroe,” King incanted.

Phi Kappa continues its efforts to recognize and honor more diverse alumni with the recent passing of a resolution to commission a portrait of Stephanie Hendricks, the alumna responsible for refounding Phi Kappa in 1991.

“Phi Kappa wants to be inclusive,” Brown said. “We want people to know that we’re striving for diversity, knowing that the university doesn’t always strive for diversity.”

As King finished his poem and the last round of applause faded out, a throng of other Phi Kappans rushed into the chamber from the hallway carrying in bottles of Sunkist and Mountain Dew.

The portrait unveiling wasn’t the only event on the schedule that night. As if to baptize the portrait in the drollest way possible, the society immediately transitioned into poker night.

The society has begun the formal motions to rename the Stephens Declamation since its introduction in 1994.

A crowd of 33 people gathered in Phi Kappa Hall on Nov. 8, to witness the Literary Society’s…

Joseph LeConte’s racist past fueled a forum on April 2 about the history of the hall which bears his name and his portrait which hangs within it.

Mary Frances Early, the first African-American to graduate from the University of Georgia, n…

From the steps leading up to the Memorial Hall Ballroom, one could hear voices and laughter …

Athens Peer Court, created in March 2012, is a youth diversion program for respondents, or juvenile offenders. The program is a hearing led by trained youth volunteers serving as the jury, lawyers and judge.

A voice for diversity: Kecia Thomas's work through Franklin College and beyond

A single mom of two, a book editor, a psychologist and an advocate for diversity, the “talent management for faculty” at Franklin College of Arts and Sciences at the University of Georgia does it all.

Senior Associate Dean of Franklin College Kecia Thomas manages faculty affairs and works with graduate students. She supports departments in selecting the best faculty available while sharing opportunities with them for recognition and promotion.

4 things: A look at the top news stories of the week

From the announcement of electric UGA buses to the signing of a medical marijuana bill, here's a recap of the top news stories of the week.

The decades-long Intersociety Debate held between the University of Georgia’s Phi Kappa and Demosthenian Literary Societies is dead and done until at least fall 2022.