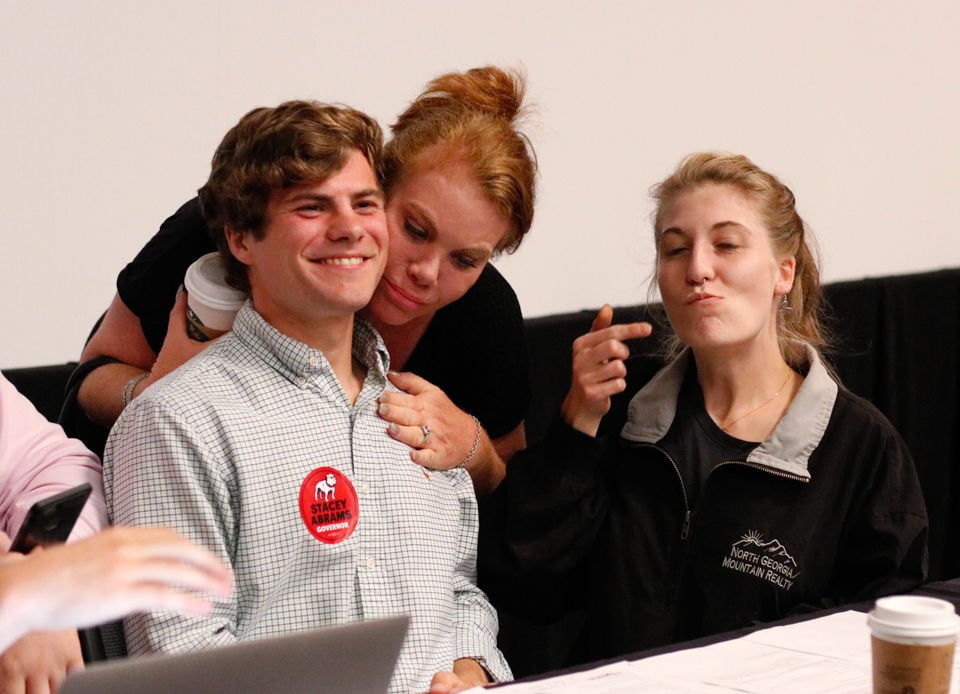 Zane Malas, a Young Democrat, gets a hug from his mom, Lisa Malas, an attorney from Milton, Georgia, while talking to her and Marley Brown, a junior ecology major at the University of North Georgia from Roswell, Georgia, during the intermission of Pizza & Politics on Wednesday, September 26, 2018, at Tate Theatre in Athens, Georgia. University Union hosted Pizza & Politics, which was a discussion of various topics between Young Democrats and College Republicans of the University of Georgia. 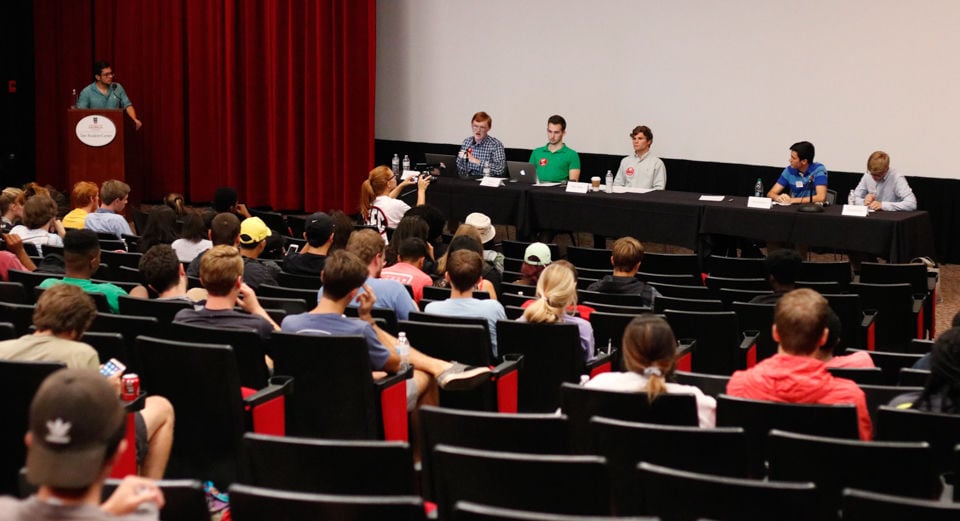 The audience watches as Young Democrats and College Republicans discuss a variety of issues at Pizza & Politics, which was hosted by the University Union on Wednesday, September 26, 2018, at Tate Theatre in Athens, Georgia. The discussion was moderated by the editor and chief of the Georgia Political Review, Sebastian Puerta, a junior economics major and one of the directors of UGA Votes at the University of Georgia from Roswell, Georgia. (Photo/Miranda Daniel, mirandadanielphoto@gmail.com) 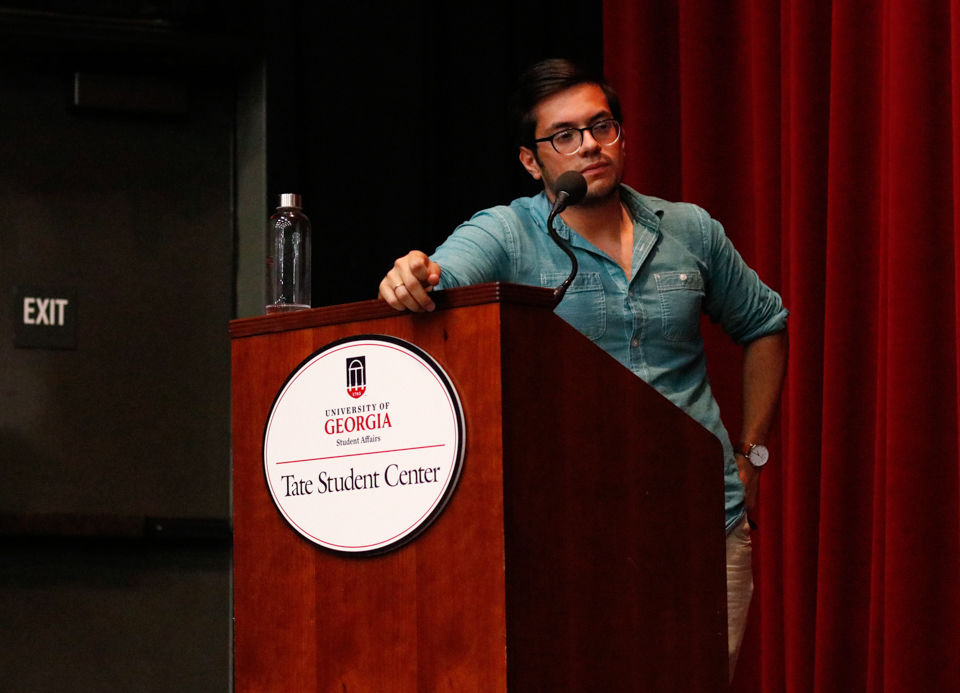 Sebastian Puerta, a junior economics major, one of the directors of UGA Votes and the Editor in Chief of the Georgia Political Review at the University of Georgia from Roswell, Georgia, moderates Pizza & Politics on Wednesday, September 26, 2018, at Tate Theatre in Athens, Georgia. University Union hosted Pizza & Politics, which was a discussion of various topics between Young Democrats and College Republicans of the University of Georgia. (Photo/Miranda Daniel, mirandadanielphoto@gmail.com)

“It’s nice to see both sides have a sense of humor,” said Sebastian Puerta, the moderator, to the laughter of the audience at the Pizza & Politics event on Sept. 26 hosted by University Union.

“The point of this is not to be a battle to the death; that’s the Great Debate. I want this to be a discussion. I want people to listen and to talk,” said Puerta, Editor in Chief of the Georgia Political Review. “I want both people to see both sides share a lot of the same ideas and in that see that we’re all human. And all humans have humor.”

The event started at 7 p.m. and ended at 9 p.m. The questions at the event touched on trade policies and college debt on a national level and ways to help local business and tax reform on the state level.

The event was orchestrated by Alexandria Perdue, who serves as socially conscious director for University Union.

“These midterm elections coming up are going to be a major turning point for this country depending on the results, and I really wanted to create a discussion and get people out and excited about it,” Perdue said. “I wanted to bring the two major parties together to also show that we all working towards the goal to make this country better.”

There were approximately 200 members in the audience, Perdue said.

One freshman, Jasmine Canlas, came with her friend to listen in on the discussion. At the event, she noticed the panelists often agreeing with each other.

“You don’t really see very often Republicans and Democrats agreeing or necessarily acknowledging that they are agreeing on a lot of different issues, but here a lot of the time, one thing would be said and the other group would say ‘I agree with that,’” Canlas said.

A 38-year-old woman was struck and killed by a car on Winterville Road on Sept. 27, accordin…

A student using a Tate crosswalk was hit by a University of Georgia bus on Wednesday, Sept. …

Five things: Quick takes on things you might have missed

A lot goes on around Athens and UGA campus and sometimes it can be hard to keep up. From Geo…

The smell of books and the sound of chatter filled Avid Bookshop on Sept. 27 for the Banned Books Bash hosted by the Georgia ACLU and Avid.

On the heels of its house’s 50th anniversary, Delta Gamma is in the process of renovating its house to “match the look of Milledge Avenue” thr…

Derrick Maxwell, Cedar Shoals High School principal, did not originally intend to get into academia.