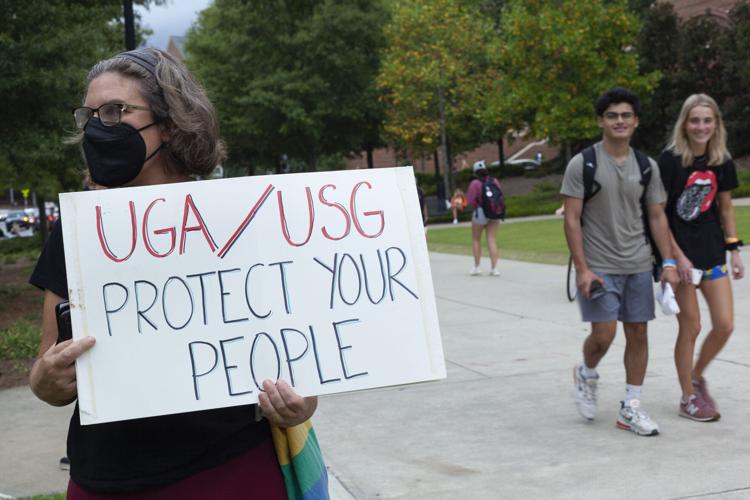 A protester holds a sign while unmasked students pass during a protest organized by the United Campus Workers of Georgia and the American Association of University Professors on Friday, Sept. 17, 2021 in Athens, Georgia. The protesters gathered for a fifth consecuative day advoacting for indoor mask requirements on UGA's campus and COVID-19 vaccine mandates for those non-exempt due to medical or religious reasons. (Photo/Sydney Fordice, sydneyfordice@gmail.com) 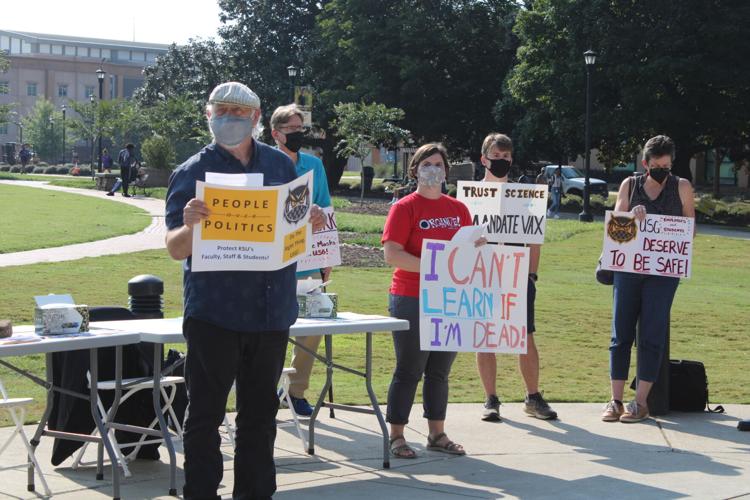 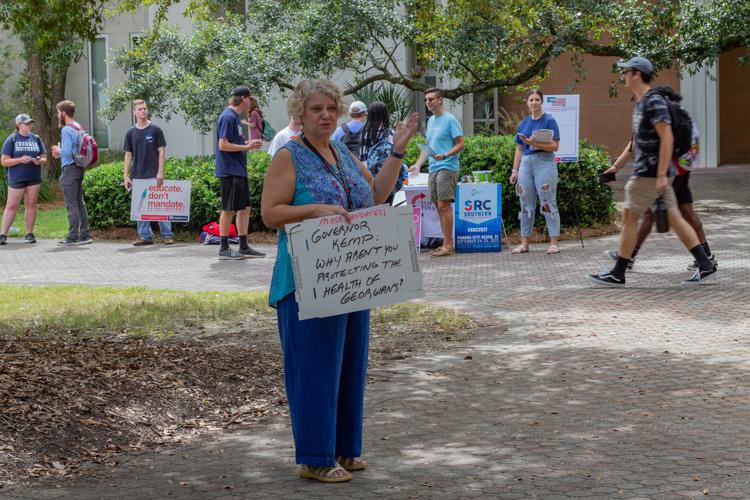 A protester in support of mask mandates holds a sign in front of Turning Point members at Georgia Southern University. (Photo/Courtesy The George-Anne) 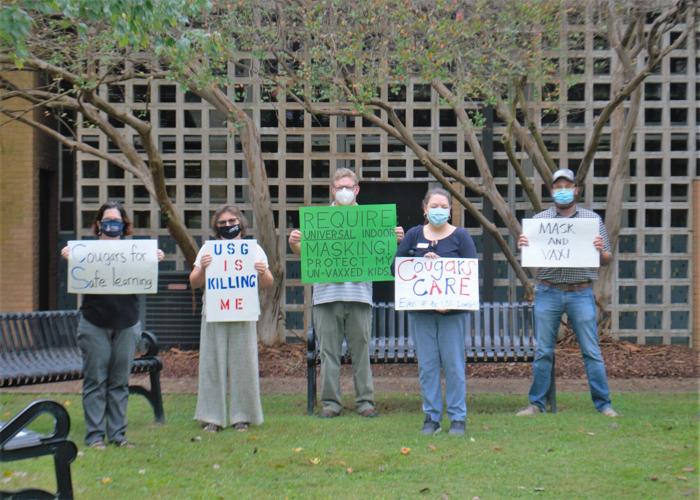 The University of Georgia’s campus was alight with protests between Sept. 13-17, as some students, faculty and staff called for the University System of Georgia to implement mask and vaccine mandates on its 26 campuses.

The calls for these precautions were not confined to UGA, but spanned 16 USG campuses across the state, according to Mikaela Warner, a member of UGA’s chapter of the United Campus Workers of Georgia. The protests were organized by UCWGA — which has members at 20 campuses, according to the organization’s website — and the American Association of University Professors.

Paul Grant, co-president of UCWGA and a professor at Georgia Gwinnett College, said he felt the protests were well-attended and respectful.

“I don’t think they were overly harsh or critical of the administration in terms of creating caricatures of people in leadership positions, but I think faculty made the point that they felt the current policy … is unsafe and unwise policy that puts students, staff and faculty at risk,” Grant said.

Protesters at UGA clashed with counterprotesters from the Athens Anti-Mandate group during Monday and Friday’s protests. The George-Anne reported similar counterprotests at Georgia Southern University, where members of Southern’s chapter of Turning Point USA arrived at UCWGA’s protest on Wednesday.

Grant said he attended the protests at GGC, and while he saw no counterprotesters there, he wasn’t surprised the demonstrations drew some criticism elsewhere.

“I understand their argument about freedoms not to wear a mask, not to be vaccinated, and I would say under a number of other circumstances, that would be a very strong argument,” Grant said.

Grant said he supports mandatory vaccines and masks because one person’s choice not to wear a mask or get vaccinated can have adverse consequences for other people, especially in crowded classrooms and other places on campus.

Not a campus decision

In an email to The Red & Black, UGA spokesperson Rod Guajardo said the university understands the concerns protesters have and respects their First Amendment rights to express those concerns.

“We are doing everything within our power to protect the health, safety and wellbeing of our community,” Guajardo said. “The USG does not allow its institutions to enact mask or vaccine mandates.”

Grant said he hopes the statewide protests increased USG’s awareness of the desire for COVID-19 safety mandates, but his optimism that any changes will occur is waning.

“I don’t know if, given the current politics of the state of Georgia, if it will make a difference at this point,” Grant said. “I think we will continue to make our argument and hope that, hopefully, the people in power will see the light.”

For the past five days, University of Georgia students, faculty and staff gathered to protest the University System of Georgia’s lack of mask and vaccine mandates at their 26 colleges and universities.

With COVID-19 cases still high across the state and county, staff and faculty at the University of Georgia are frustrated with what they feel is a lack of leadership.

COVID-19 cases and testing continued to show a decrease at the University of Georgia this week.

Police arrested a 15-year-old and a 21-year-old and charged them with the murder of a 19-year-old that occurred on Thursday.

More than 50 UGA professors to mandate masks against USG policy

More than 50 University of Georgia life sciences faculty members have signed a letter to the University System of Georgia stating that they will mandate masks in their classrooms. Current USG policy prohibits such requirements

March for Reproductive Justice to be held in Athens on Sunday

In response to a recently-passed Texas abortion law, a March for Reproductive Justice is to be held in Athens this Sunday.

COVID-19 cases decreased by about half at the University of Georgia from last week, while surveillance testing also dropped.

In a Wednesday meeting of the Board of Regents, the University System of Georgia approved changes to post-tenure review, including lower standards for firing tenured professors and additional metrics for evaluation.

By this point, UCWGA-UGA had already adjusted the campaign’s demand, urging a minimum of $20/hour by 2024 given that $15/hour was no longer liveable in Athens, Georgia — not for anybody.

Jake Drukman is The Red & Black's news editor, and has worked for the paper since 2019. He is a senior journalism major with a minor in criminal justice. He especially enjoys covering local politics and crime.