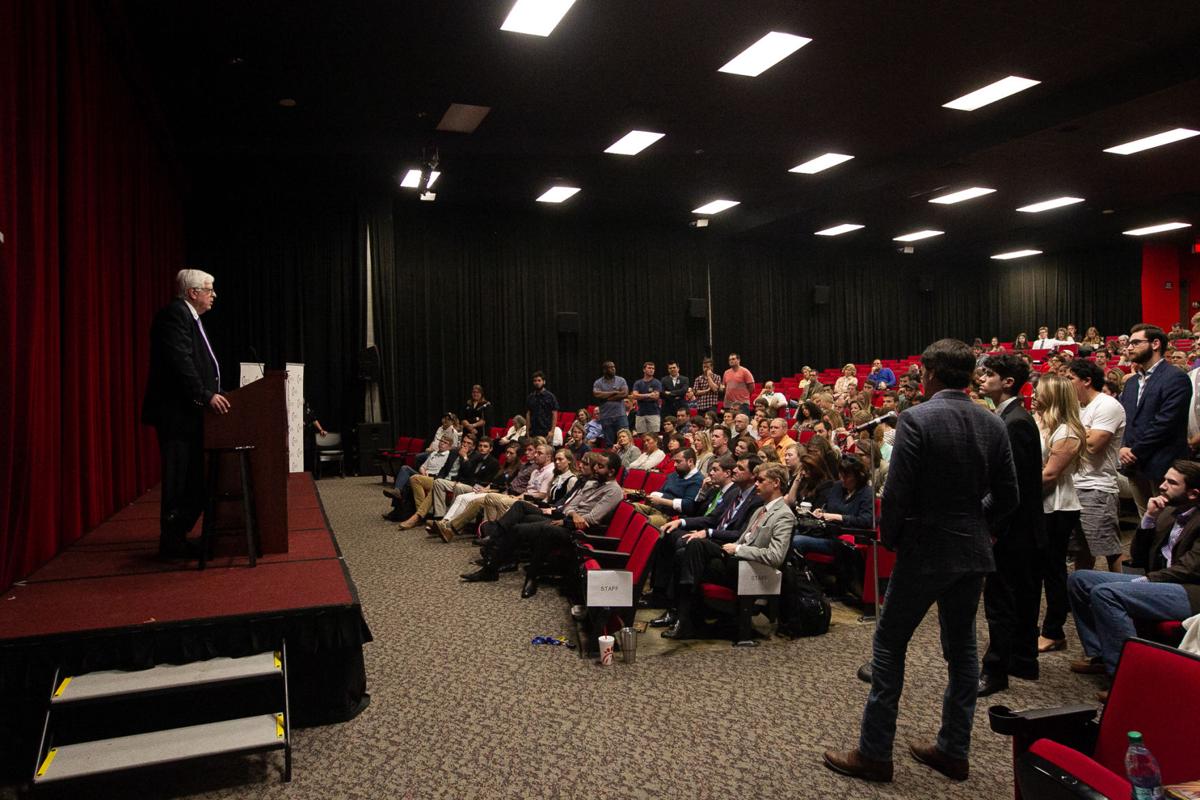 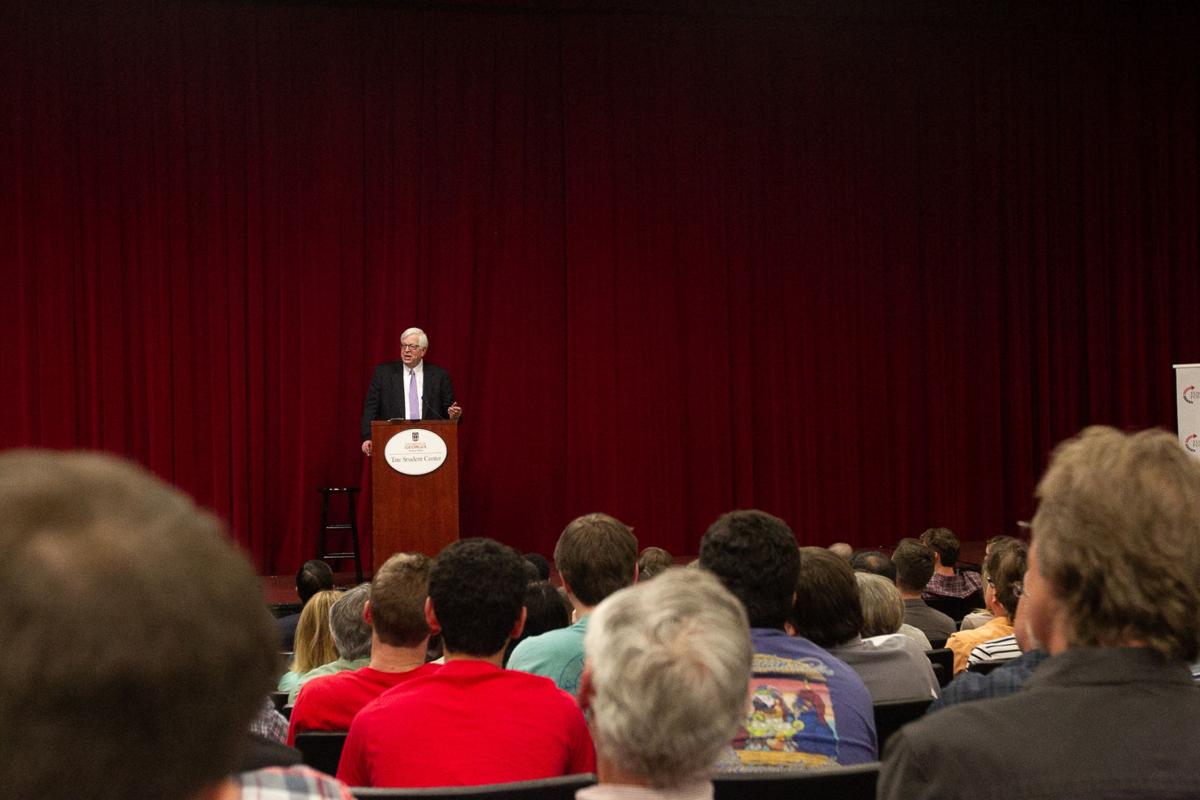 Dennis Prager spoke to UGA students primarily about socialism, but he also touched on issues such as abortion and sexual orientation. 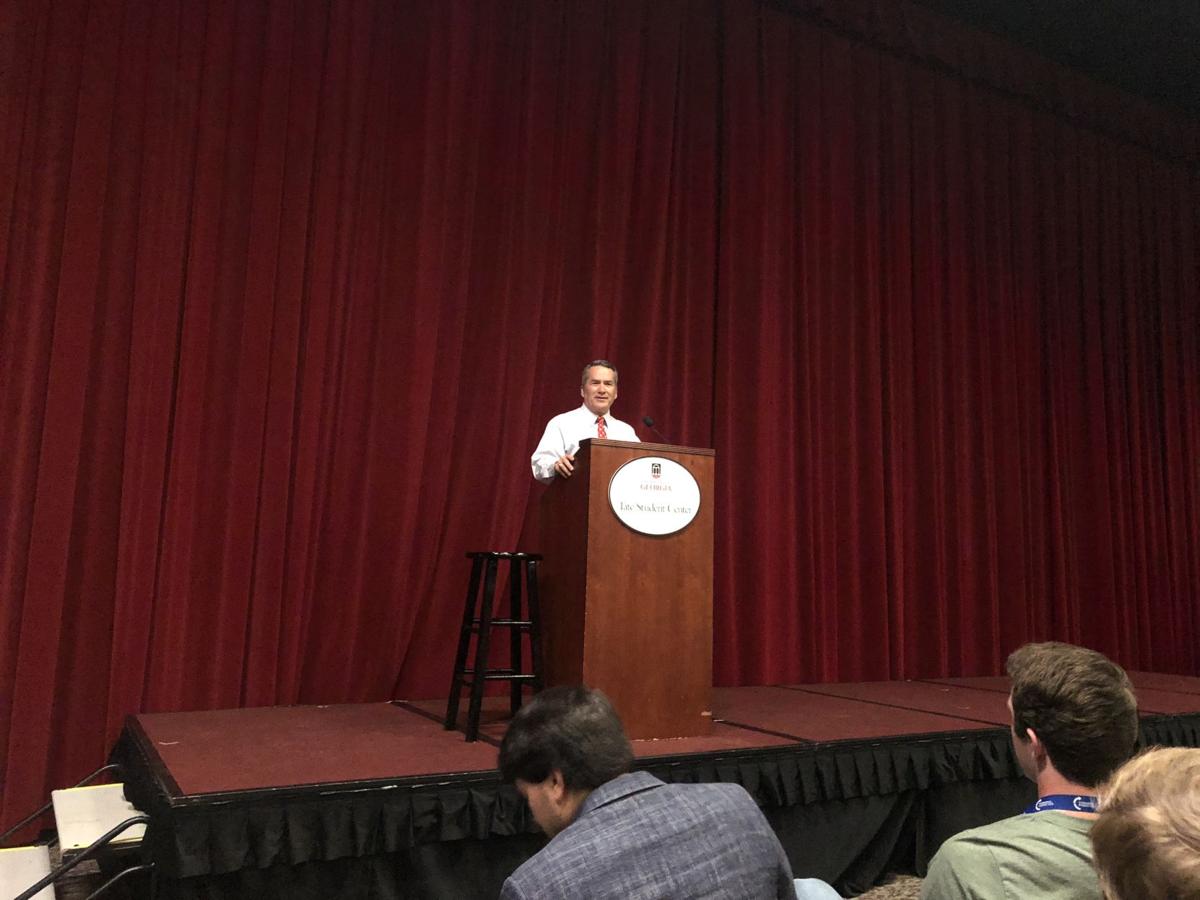 A graphic novel edition of Ayn Rand’s “Anthem” adorned the seats in Tate Theater on Tuesday as Dennis Prager shared with attendees why he believes the political philosophy of socialism pumps out selfish individuals.

Approximately 400-450 attendees from across the ideological spectrum listened to Prager’s personal beliefs on socialism and left-wing politics.

He said rather than doing it “the American way,” where individuals have an obligation to care for one another, socialists expect the government to do the heavy lifting and provide for its citizens by helping them, to which Prager said the left has “a broken moral compass.”

Prager said socialism allows an easier livelihood in theory, which is why people subscribe to the philosophy, and human nature craves someone to provide for them. He said socialism tugs at the worst behaviors of human nature and leads to a loss of morality.

In his critique of left-wing politics, he said the left loves to bash America, even though America “is the least racist country” and the left treats libeling America as “an art form.”

Dill Shelton, a sophomore English education major from Jasper, asked Prager during a Q&A session about hypocrisy in his argument against socialism. TPUSA gave audience members copies of one of Ayn Rand’s books, but she herself, a well-known anti-socialist, said individuals must be selfish. Prager responded by saying individuals should be selfish to the extent they do not think solely of themselves.

Hayes Way, a sophomore double mathematics and physics and astronomy major from Hawkinsville who identifies as liberal, attended the event to “hear what some of the most influential opinions in America are saying.”

Way plans to vote for Bernie Sanders in the Democratic primary election in 2020 and said Prager utilized “straw-man arguments” in his rhetoric against the left.

On the other side of the ideological spectrum, Ted Koval, an 11th-grade homeschooler, attended the speech in support of the Republican Party. Koval agrees with Prager’s take on socialism and said, “Socialism is a great evil in the world right now; it promises a short-term gain for a really bad long-term.”

After Prager said the left treats pregnancy as “a pimple,” an attendee asked Prager for his thoughts on the Georgia heartbeat abortion bill, which passed the Georgia General Assembly in March. Abortion is the only thing from which the left wants the government to stay away from, Prager said, and the only freedom the left wants to give women.

In addition to his thoughts on abortion, Prager also shared his thoughts on same-sex marriage after a UGA student referenced the LGBTQ flags in Tate Student Center. The student asked Prager his thoughts on why Tate did not place a heterosexual pride flag in the student center if they chose to hang LGBTQ flags, to which the audience clapped in response.

Prager said a board member of Prager University and close friend of his identifies as gay, but Prager himself would not celebrate homosexuality. He said the ideal marriage is between a man and a woman, to which he added, “I will not hurt society by denying that, that is the ideal.”

Facebook removed controversial content from Prager University’s page, which led to the social media website’s apology to Prager in 2018. Facebook said it had made a mistake, but Prager said the removal was “deliberate” and an “attack” on conservative ideas, according to BBC News.

A year earlier in 2017, Prager University sued Google for placing age restrictions on the organization’s content posted on YouTube. A judge dismissed the case in March of 2018.

President Donald Trump’s push to fund a border wall using emergency funds emerged successfully on Tuesday from a battle waged between Congress and the White House.

As the signs come down and the stickers are peeled off, election season is drawing to a clos…

'The Great Debate' pits UGA Democrats and Republicans on the stage

In an auditorium crowded with politically involved students, the University of Georgia Young…

At the 117th Sibley Lecture on April 12 hosted by the University of Georgia Law School, University of Chicago Professor David Strauss spoke about whether or not Supreme Court decisions are actually the law of the land.

Celebration and conversation: IsraelFest and SJP tabling held on campus

State Representative Houston Gaines of District 117 was named the 2019 Champion of Recovery and friend of the Georgia Recovery Community by the Georgia Council on Substance Abuse. Gaines received the award for his work on House Bill 217, which authorizes syringe services programs in the state of Georgia.

Despite rising doubts to the contrary, the University System of Georgia is a positive force for students and the rest of the state.