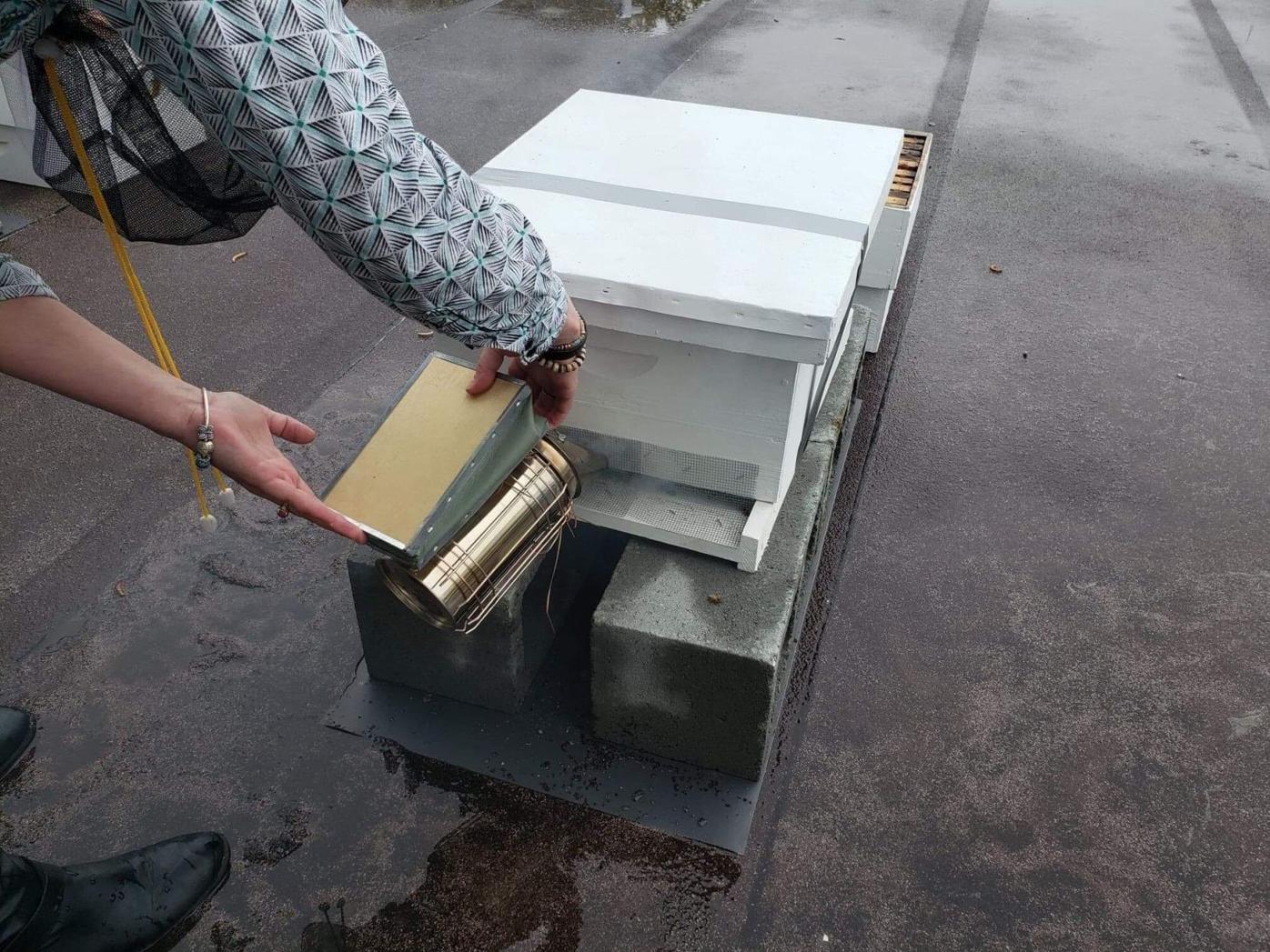 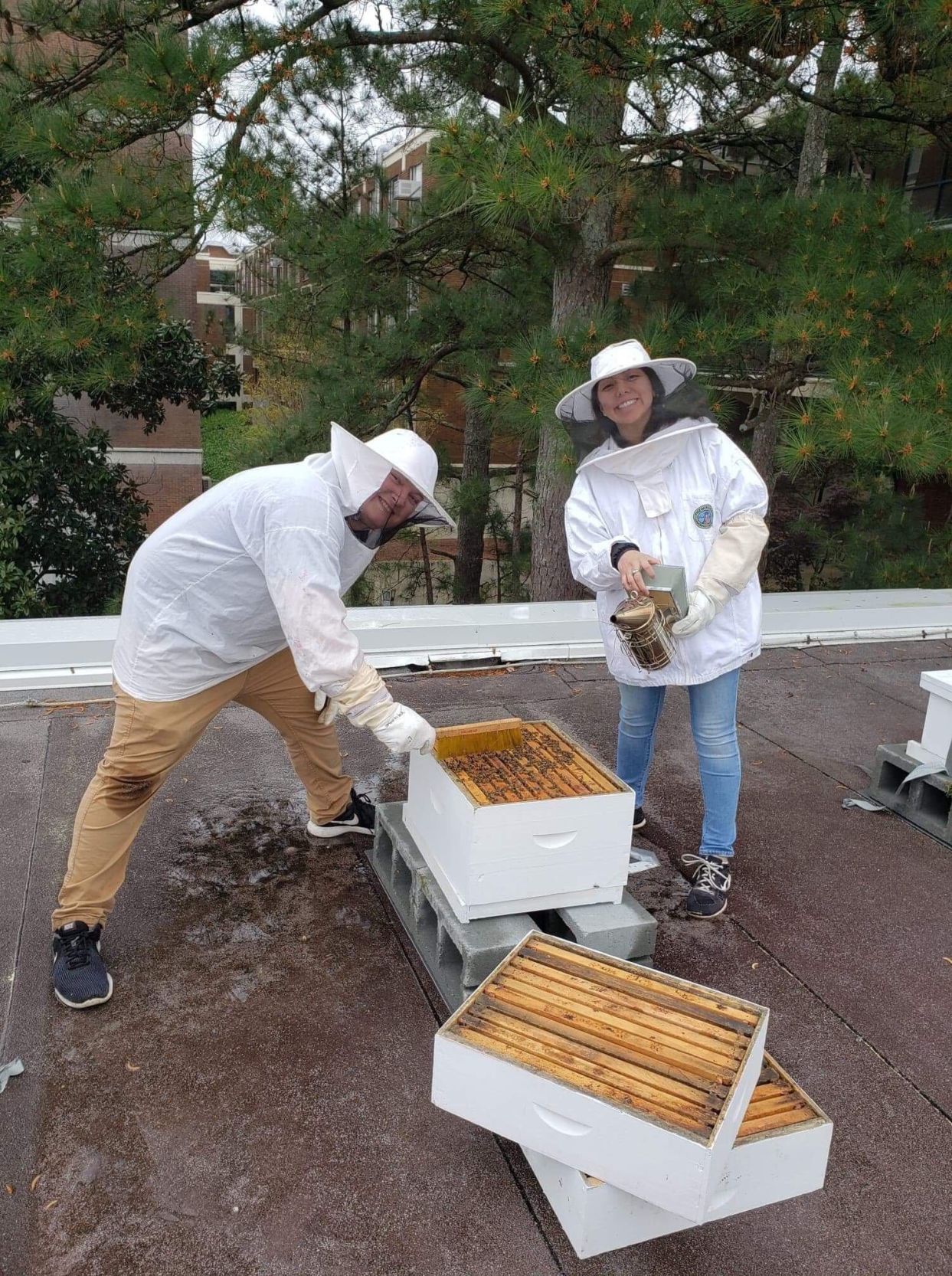 Senior biology major Joshua Grier is a 2019 grant recipient for campus sustainability and received $3,000 for his “Urban Pollinator Project.” The basis of the project is to raise awareness of bees or pollinators and create learning opportunities.

“If you can go somewhere and you can see these organisms doing their daily thing, then you're going to be a lot more conscious about what you're doing that affects pollinators,” Grier said.

Grier used to help his grandfather raise bees and sell honey in Savannah when he was around nine years old. Over time, especially in college, he’s learned more about the importance of both bees and urban agriculture.

He along with Aileen Nicolas, a senior geography major and Grier’s capstone partner, introduced thousands of honeybees to the rooftop on March 29 as part of their capstone project to earn their sustainability certificate, Nicolas said.

Within the project’s goals, Grier and Nicolas are creating the UGA Honey Bee Club which is expected to start by next fall; however, they are leaving the club to upcoming leadership. Grier will be graduating and Nicolas will simply provide support for the club as she has decided to focus on her master’s.

They are not worried about the club’s membership, due to receiving over 30 responses to leadership applications. The club will be open to anyone, as it is intended to bring people together to learn and interact with the honeybees.

“[As] someone who does not have a lot of experience with bees, I will say that I’m really thankful for this project because I used to be really scared of insects,” Nicolas said. “Now I am so close to them.”

Equipment and other supplies funded by the grant to maintain the bees is being provided to club members. As for the honey the bees will produce, Grier is leaving it up to the club to decide whether or not to sell it. However, he would love to see them use money from honey sales to eventually fund future projects, Grier said.

They also hope to see the club expand to other rooftops and green groups around campus as others have already expressed interest.

One of those people who has expressed interest is Marianne Shockley, a faculty member in the department of entomology. Shockley worked with Grier as his faculty sponsor for the project, and she is actively working with the club as the faculty advisor.

Shockley’s service learning class installed rooftop beehives on the Biological Sciences Building around 10 years ago; however, they had to move them due to reroofing. Grier eventually found her as she was looking for an opportunity to partner with students again and it seemed as if the stars aligned, Shockley said.

“I see an opportunity for people to learn about bees, to learn about beekeeping, to learn about the other products that we can extract from hives: like wax, candles, or the moisturizer for lip balms,” Shockley said. “[We can] look at this as a model for what universities can do to add to the idea of sustainable agriculture on our campuses.”

From maintaining beehives to participating in outreach programs and teaching summer camps, Shockley is looking forward to the new opportunities the club and hive brings. It will serve as a learning experience for those of all ages.

“Humanity has grown so dependent on honey bees,” Grier said. “I'm really into the whole integration of agriculture into urban environments, and I think bees are a really good way to bring that kind of into focus.”

Much like many University of Georgia students, alumna Jasmyn Reddicks changed her major thre…

Despite the rain, Athens locals congregated downtown to fight for issues of injustice at the 41st annual Athens Human Rights Festival. A stage was set up on College Avenue where musicians performed and people presented topics relating to the festival’s “Social Justice, Environmental Justice" theme on May 4. The two-day event encourages the Athens community to unite for a weekend of activism.

The West Broad Farmers Market kicked off the 2019 season with its annual May Day Celebration on May 4, 2019, in Athens, Georgia. The event fea…

The bark of a small dog rings in the air of Bishop Park on a warm, sunny Sunday afternoon. A…

As the University of Georgia’s student body changes, the policies, curriculum and technology must adapt with it.

The President’s Task Force is a group of 20 UGA faculty members that was assembled to “advance the institution’s longstanding commitment to excellence in undergraduate education,” according to its 2017 Report of Progress and Recommendations released in December and its updated report released in March 2019.

This student-led organization is made up of members who feel strongly about protecting marine life. These students are focused on informing UGA and the Athens community on the way that human activities contribute to the pollution of the Atlantic Ocean.

OPINION: Umbrellas are an underappreciated form of sun protection

Drop your sunscreen, there's a better way to guard against the sun this summer.

UGA involvement guide: Breaking down clubs and organizations by interest

There are over 37,000 students at the University of Georgia — both undergraduate and graduate — and the freshman class has been growing in size each year. However, students can rely on a consistent network of student and university-run clubs and organizations.

OPINION: Students should find ways to be more sustainable on campus

From dining hall composting to the efforts of the Office of Sustainability, UGA strives to reduce its environmental footprint. Students should learn to do the same.