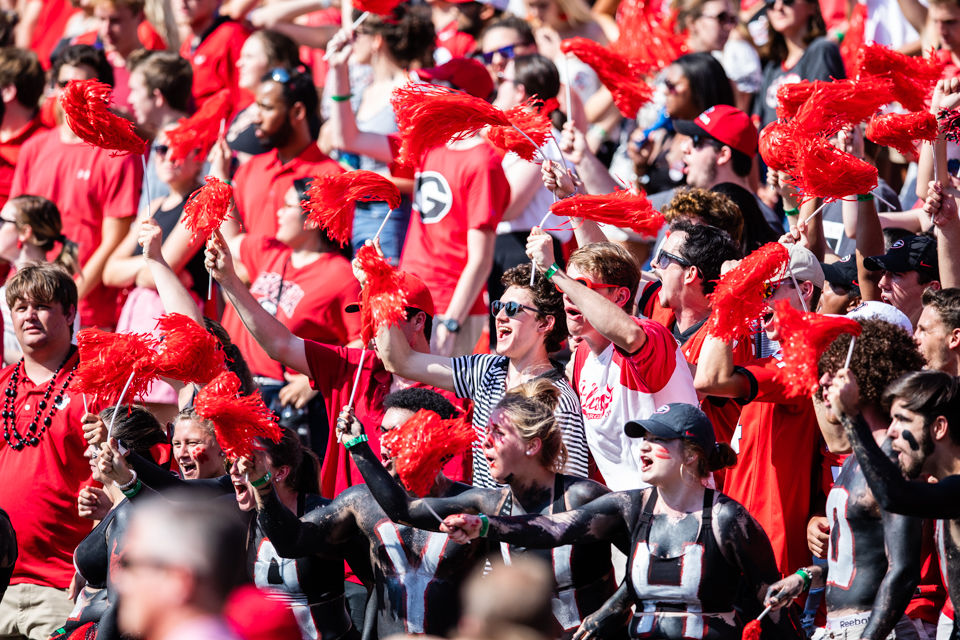 Fans cheer during the first half of Georgia’s home opener against Murray State University in Sanford Stadium on Saturday, Sep. 7, 2019, in Athens, Georgia. At the end of the half, the Bulldogs led the Racers 42-7. (Photo/Ryan Cameron, rcameron@randb.com) 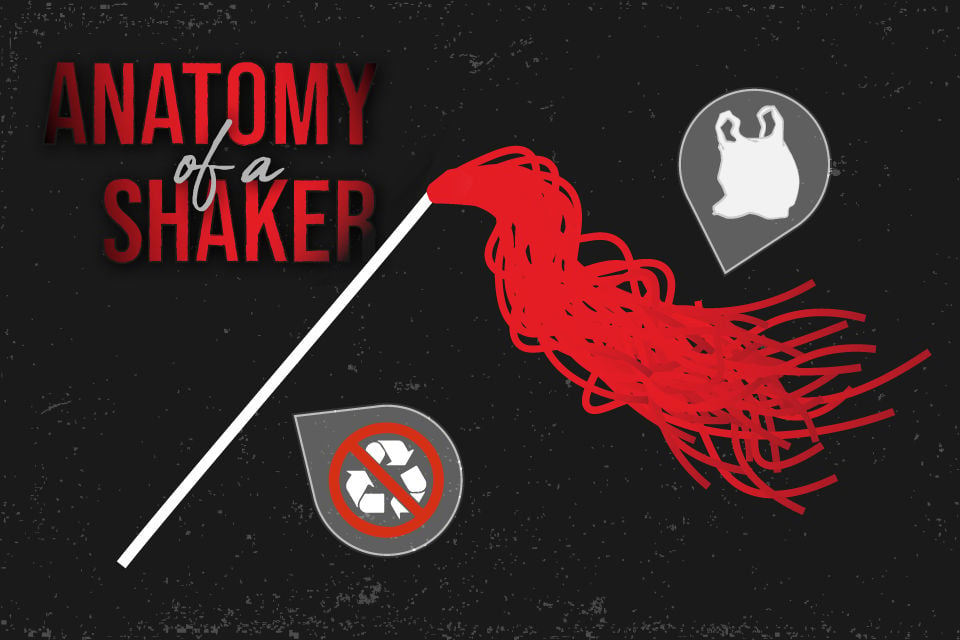 With the help of complementary shakers and newly installed LED lights, Bulldog Red bleeds throughout Sanford Stadium on Georgia gamedays. The LED lights, debuted during the fourth quarter of the Georgia-Notre Dame game on Sept. 21, were newly installed for the 2019 football season.

The LED lights were installed this summer as a $950,000 investment. UGA Athletics spokesperson Claude Felton said the stadium lights were due for renovations. LED lights are cheaper and use less power than traditional HID lamps, Felton said, which led to the switch.

More familiar to fans, though, are the shakers that have become an integral aspect of the football experience, complimentary each gameday.

But it all comes at a cost.

The UGAAA allocates 7% of its $140,000 promotions budget, or about $9,800, to purchasing new shakers for every gameday, according to Felton. A total of 365,000 shakers are ordered from Valley Decorating incrementally throughout the season, away games included.

The few shakers left are sent to a Jackson County recycling facility, he said.

Recent UGA alumna Katherine Shayne is the co-founder and CEO of Can I Recycle This?, an artificial intelligence-powered system which answers recycling questions on social media sites. Shayne said the plastics from the shakers are not biodegradable and are harmful to the environment.

“Any plastic material or product that enters the environment that shouldn’t be there can have effects on water systems and on wildlife,” Shayne said. “They’ll be in the environment, in the soil, in the water for forever.”

The simplest solution is for game-goers to refuse the shakers, Lumsden said. However, if they still want to partake in the tradition, Lumsden said they can prolong the life of the shakers by taking better care of them.

“The four R’s of being more conscious is refusing, reducing, reusing and recycling,” Lumsden said. “Another thing they can do is get one of the [shakers], take care of it for a semester and use it for four years.”

Because reusing the shakers is not the most realistic solution, Lumsden said the Athletic Department could start by investing in more durable alternatives.

“Even if they were made out of plastic ... and they were sturdy enough to last, people are still using the pom-poms,” Lumsden said. “The tradition is still there, but they’re not as disposable as they have been.”

The University of South Carolina, for example, hands out towels for fans to wave around. Felton said UGA attempted implementing a towel program in the past, but more trash and cleanup was required.

However, the sustainability issue on gameday is a larger issue than the shakers, said Jessica Mitchell, who also works for Can I Recycle This?. While shakers could be a starting point, Mitchell said sustainable habits on gameday can go beyond the stadium, such as decreasing litter and waste generated from tailgates.

“Even if the problem may not be the most pressing issue of sustainability on campus, I think it could be a good symbol for taking strides to make campus more sustainable,” Mitchell said.

Since the football tradition is embedded in UGA, Shayne said it could be a segue into promoting more sustainable practices.

“This is a good way to start this conversation of how we can be more sustainable in the stadium at football games, where people are already in a good mood, having fun,” Shayne said.

Georgia football ready for another LED light show, this time with a twist

On Saturday, UGA will use different colored LED lights during its military appreciation game, according to Mike Bilbow, the assistant athletic director of digital and production.

More than meets the eye: Georgia gamedays made possible by behind-the-scenes work

Employees work 10-hour days to ensure the quality of the lights, hedges, grass, escalators, elevators, concessions and countless other aspects of the stadium.

In 1997, the National Recycling Coalition created America Recycles Day as a way to bring awa…

‘All things come to an end’: Georgia seniors set to suit up for final game in Sanford Stadium

Georgia football lists 16 seniors and four graduate students on its roster, and each departing player will be saluted before his last game Between the Hedges on Nov. 23 against Texas A&M.

Nine years ago, Sgt. O’Neal Saddler received a dream offer — to join the Georgia football team. However, it wasn't as a coach or a player.

Within the last few months, all of the University of Georgia’s dining halls have become cert…

UGA is investing about $2 million over the next two years in lighting and security improvements aimed at improving safety.

8 everyday environmentally friendly swaps the Earth will thank you for

In our cause-oriented, environmentally focused society, many strive to give back and make th…