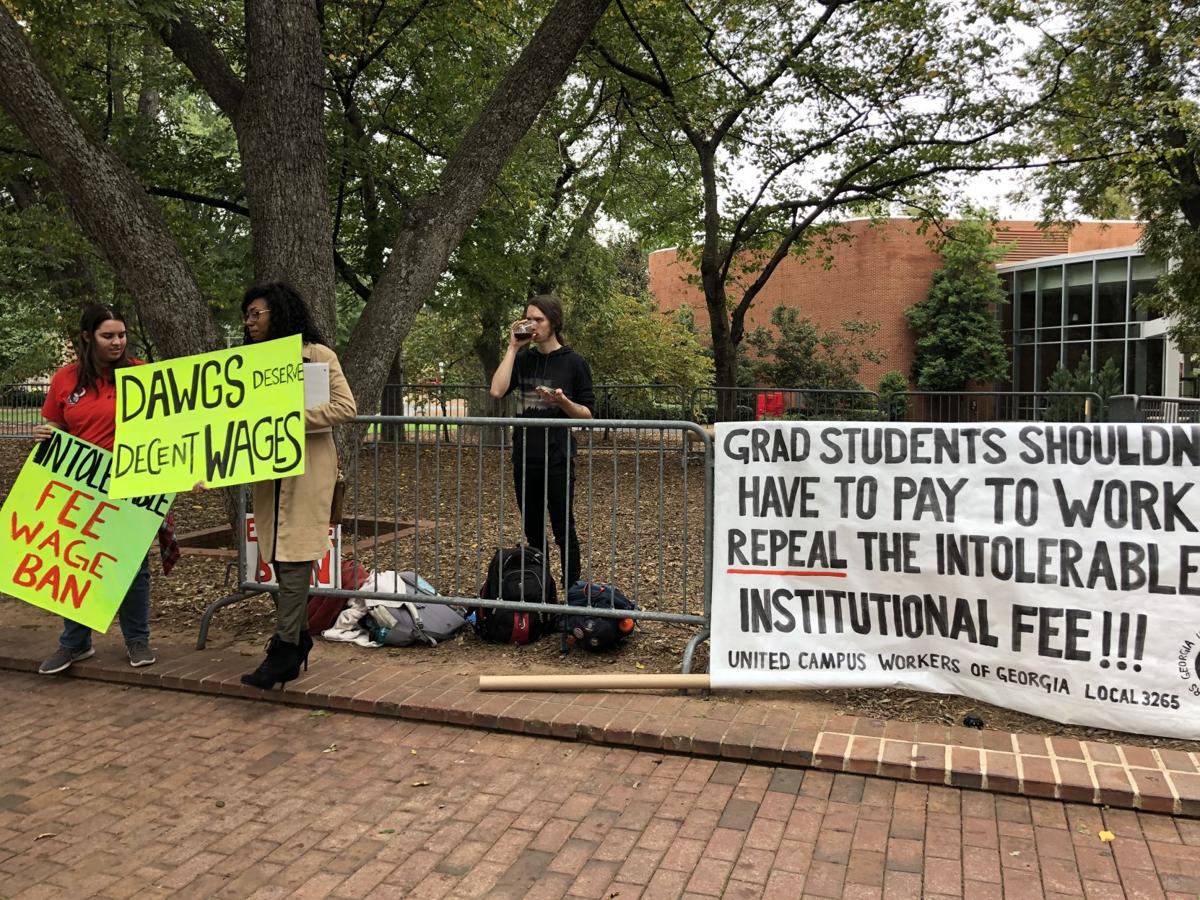 The United Campus Workers of Georgia rallied outside the University System of Georgia Board of Regents meeting at the Georgia Center on Oct. 15, and protested the mandatory $450 special institutional fee. 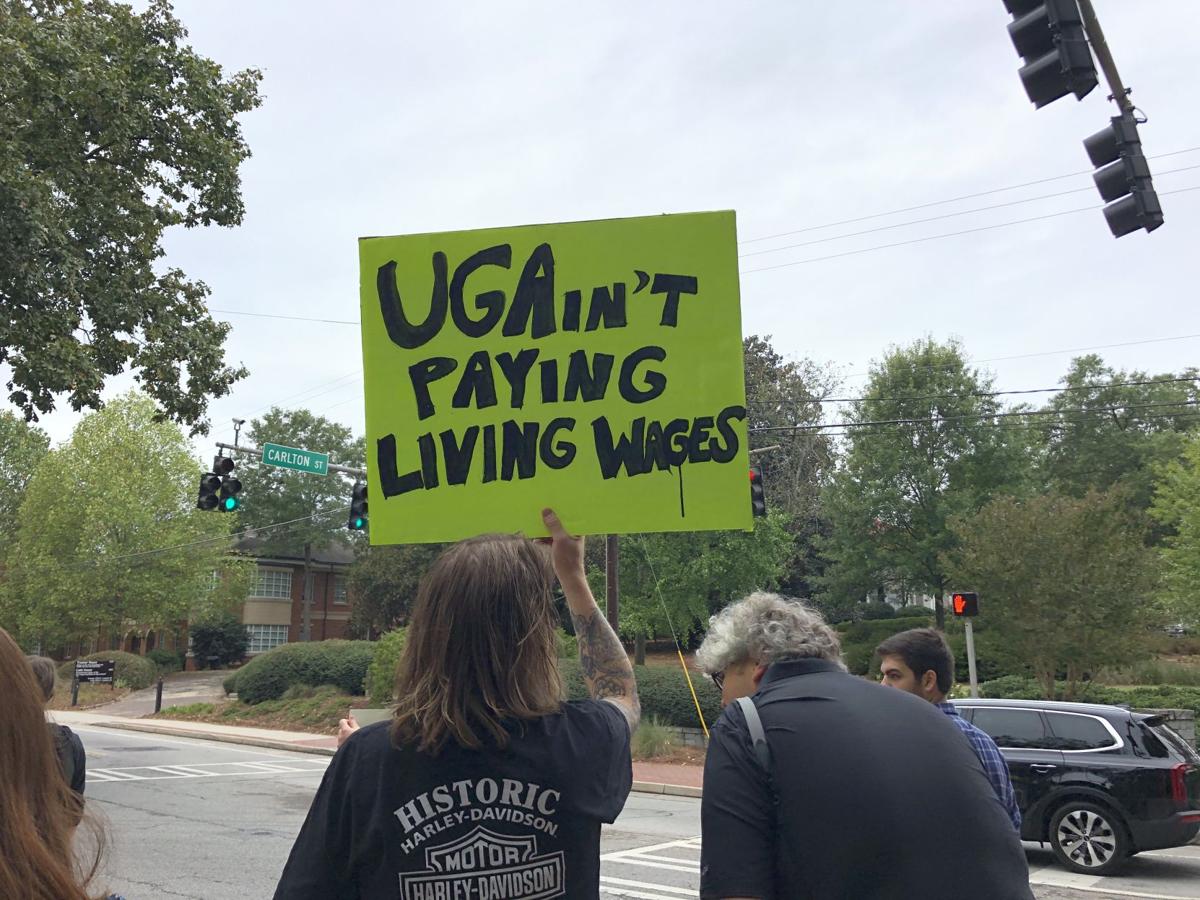 The Athens Coalition for Recognition and Redress rallied outside the University System of Georgia Board of Regents meeting at the Georgia Center on Oct. 15, and demanded the University of Georgia raise its minimum wage.

The United Campus Workers of Georgia rallied outside the University System of Georgia Board of Regents meeting at the Georgia Center on Oct. 15, and protested the mandatory $450 special institutional fee.

The Athens Coalition for Recognition and Redress rallied outside the University System of Georgia Board of Regents meeting at the Georgia Center on Oct. 15, and demanded the University of Georgia raise its minimum wage.

Surrounded by metal barricades outside a University System of Georgia Board of Regents meeting, the United Campus Workers of Georgia and other Athens organizations demonstrated for the removal of the special institutional fee on Oct. 15, among other issues.

Approximately 30 people attended the rally at the University of Georgia Center for Continuing Education and Hotel “to bring attention to the financial hardships of graduate students” and the “burden” of the special institution fee, said Justin Simpson, a member of the UCWGA Graduate Committee.

UGA, Georgia Tech, Georgia State and Georgia Regents University students enrolled in more than five credit hours are charged a mandatory special institutional fee of at least $450 each semester, according to the UGA Bursar’s Office. There are exceptions to the required fee: students aged 62 and older, classified as active duty military, dual-enrolled or utilizing the tuition assistance program are not charged the fee.

UCWGA said graduate students should be exempt from the fee in part because the fee helps fund their own stipends.

“When you total up all our fees, this takes up 16% of our income,” said Rachel Perez-Udell, a plant biology doctoral student. “To have such a huge chunk of money taken away ... each paycheck is painful for a lot of my friends. There’s no way for them to save, no way for them to take care of unexpected expenses.”

According to the ACC Fiscal Year 2020 Approved Operating and Capital Budget, UGA employs approximately 10,700 people in Athens — the most of any employer in town. The second largest employer in Athens, Piedmont Athens Regional Medical Center, employs 3,300 people.

“[UGA has] the most significant role to play in making Athens-Clarke County such an intensely impoverished place,” Black said.

When the fee was established in 2009, the original purpose was to counter state budget cuts amid “serious economic downturn” and “to ensure continued academic excellence,” according to a fee descriptions document from the Bursar’s Office. Perez-Udell said the fee was originally intended to be temporary, with no guidelines for when it would be removed.

Funds from the fee “are available to support any level of operations that would be appropriate for any educational and general fund source,” the document states.

Simpson said the Board of Regents has been responsive to the UCWGA’s requests in the past and has agreed to meet with the UCWGA regarding the fee issue.

“We have a lot of hope here, so this is why we’re rallying today,” Simpson said.

The institutional fee wasn’t the only focus of the rally. The Athens Coalition for Recognition and Redress — a five-way partnership between the UCWGA, Athens Anti-Discrimination Movement, Athens NAACP, Economic Justice Coalition and Athens for Everyone —  advocated for an agenda of its own.

A4E president Rachelle Berry said her goal for the coalition is to bring “racial justice into our organizing at all levels.” As a doctoral student at the university, she attended the rally in protest of the fee and low wages, along with other issues such as ending the ban on undocumented students.

“The best students are banned from coming here with some of the most diverse experiences,” Berry said.

Everything you need to know about the Baldwin Hall controversy

For four years, the Athens community and the University of Georgia administration have been …

Gov. Brian Kemp has appointed Rachel Little, a Loganville resident and paralegal for a pharmaceutical company, to the University System of Georgia Board of Regents.

Gov. Kemp appoints five new members to Board of Regents

Gov. Brian Kemp made five appointments to the University System of Georgia's Board of Regents, according to a Jan. 3 press release.