On Jan. 10, 1961, The Red & Black ran an extra edition of the paper with that headline printed in large type across the front page.

Tom Johnson, who covered the story, recalled the palpable tension on campus, with “the eyes of the nation on Athens.”

“Most of the students recognized that this was a significant moment in the university’s history,” said Johnson, who went on to serve as the president of CNN. “There was such widespread publicity and enormous presence of national media in Athens at the time.”

Johnson was a student at UGA from 1959-1963 and watched as Charlayne Hunter, now Hunter-Gault, and Hamilton Holmes desegregated the university after a federal court order that narrowly prevented the governor from cutting off the university’s funding.

“If anyone had given [Hamilton Holmes] and me a crystal ball into which we could have looked to the future 40 years hence and seen only six percent students of color in a student body of 34,000, I think we might have sat down under the Arch and cried."

Fifty-five years after the  desegregation and the gradual increase in diversity that followed, those who witnessed the event still see room for growth.

“I don't think that any university in the country has really met the expectations of the people who were fighting for equality,” Hunter-Gault said. “I think we have a long way to go to reach the point where every child can look forward to an education at the highest levels that are offered in this country.”

The 1960s were a tumultuous time across the United States and one of rapid changes for African Americans — including those in Athens.

Anna Simmons was born in Athens in 1931 and moved to Boston when she was young. Each year, she would return to visit the Classic City.

Once, when she was visiting, she walked to the back of a bus, only to be told by her brother that she could now sit wherever.

Whites saw and felt the changes too.

“In Detroit, there were more black students than here, but you could look around and see fires burning all the time [because of race rioting],” Allinger said.

When Holmes and Hunter were registering for classes at UGA, Johnson remembers state legislators calling fraternity members, urging them to resist the integration.The Red & Black referred to the desegregation as a “crisis.”

Eventually, Johnson said the campus settled down, but the racial composition of the student body did not “change a great deal.” 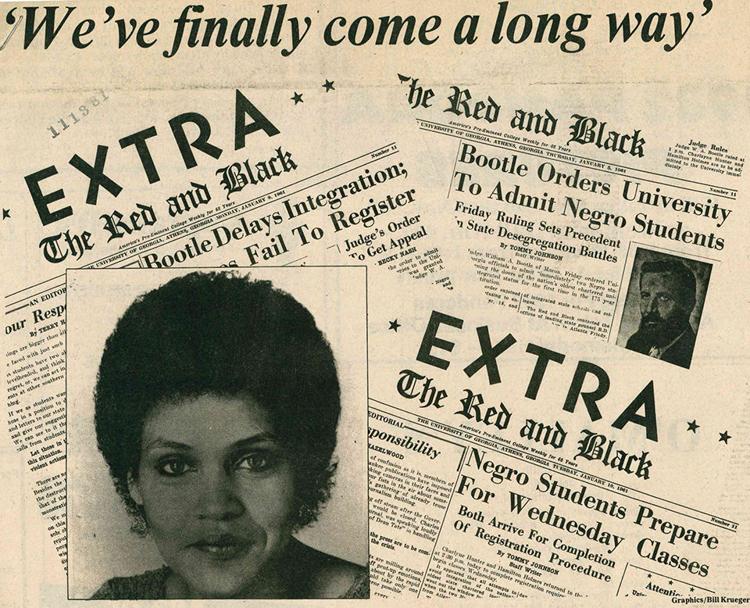 In 1972, when linguistics professor Jared Klein started teaching at UGA, only about one in 30 students in a classroom was black, he said. He was first struck by UGA’s lack of diversity at the time when he read about Horace King, one of the first black football players at the university.

“Black students were reticent to come,” he said. “Beside the first pathbreakers that came, the average African-American parent was not keen to send kids somewhere without students that looked like them.”

Victor Wilson said he was terrified when he started at UGA as a student in 1977.

Wilson said people referred to attending UGA as going “up there.” Despite this, Wilson was a pre-med student and fell in love with UGA after visiting for a high school conference.

But in his first days on campus, he experienced racism.

“In the first few days, I went downtown and was walking down Lumpkin [Street] when someone yelled out of one of the fraternity houses and called me the n-word,” Wilson said. “I kept walking and thought, ‘I am OK and they are the ones that are really ignorant.’ It was like an eggshell had been broken. I could survive it and be bigger.”

The eggshells did not break so easily in classrooms though, where Wilson said race was a taboo subject.

Around the university’s bicentennial in 1985, when Holmes returned to the university as a UGA Foundation trustee, Wilson began to see a shift toward more open dialogue about diversity.

“When Hamilton Holmes first came back to the university, that was really symbolic for a lot of black students,” Wilson said.

After the addition of the HOPE Scholarship in 1993, Klein said he also saw an increase in diverse enrollment at UGA, calling it a “watershed moment.” He said it made UGA financially attractive for students considering historically black colleges and universities.

Wilson said he is most proud of helping convince former UGA president Michael Adams to have the Academic Building on campus renamed to the Holmes-Hunter Academic building in 2001.

Relationship with the community

While the university slowly began to look more diverse after 1961, the community in Athens had always been multiracial.

As a student, Holmes lived with a black family in Athens and “would play ball” in the black community, Hunter-Gault said.

“When he would leave school, where he was doing stellar work, he had a lot of interaction with the African-American community,” she said.

On the contrary, she had been told to be careful and stay on campus until hostilities died down. However, on campus she was met with taunts and a brick thrown into her dorm room in Myers Hall.

Those in the community were aware of the violent situation on campus.

Mary Thrasher grew up in Athens during the Great Depression and remembers hearing about UGA’s integration.

“I remember when me and my husband lived in Oconee County and when we came down Lumpkin Street, you almost wondered if you were going to see a fight,” Thrasher, who is white, said of 1961. “Things seemed to calm down once [Holmes and Hunter] got in.”

Even in later decades, the city remained divided along racial lines.

Chester Malanoski moved from New York to Athens in 1976 and said students today would not believe the attitudes at the time.

“There was some belief that you couldn’t associate with black people, and I couldn’t buy into that personally,” Malanoski said. “The differential seemed like it was an accepted fact of life that I saw in the students.”

When Wilson attended UGA, he said many black students felt more comfortable in the Athens community, going to church and getting their hair cut off campus.

“For a lot of black students to find their black community and to hear their music they had to go off campus to local establishments,” he said.

In the 1980s, Wilson also saw a dichotomy between UGA and the community.

“There was a little bit of angst,” he said. “Some people in the black community saw us as sell-outs. I used to say, ‘It isn't a white institution if I am there. The only way to change it is to have more of us here.’”

With events like the annual Martin Luther King Jr. Freedom Breakfast and more students of all races volunteering in Athens, Wilson has seen the community attitude change.

“The proverbial fence has come down,” he said. “I don't think students here are seen as whitewashed anymore.”

In 2001, when Hunter-Gault delivered the annual Holmes-Hunter lecture, she shared her disappointment in the low percentage of students of color at UGA.

“If anyone had given [Hamilton Holmes] and me a crystal ball into which we could have looked to the future 40 years hence and seen only six percent students of color in a student body of 34,000, I think we might have sat down under the Arch and cried,” she said at the time.

“There are many institutions where the percentages are smaller than they can or should be, but students of color have found a home and found a place where they could realize their dreams,” she said. “I know there are issues that young people of color are facing on campuses, most recently highlighted by the issues at the University of Missouri, but I have heard of microaggressions for many years.” 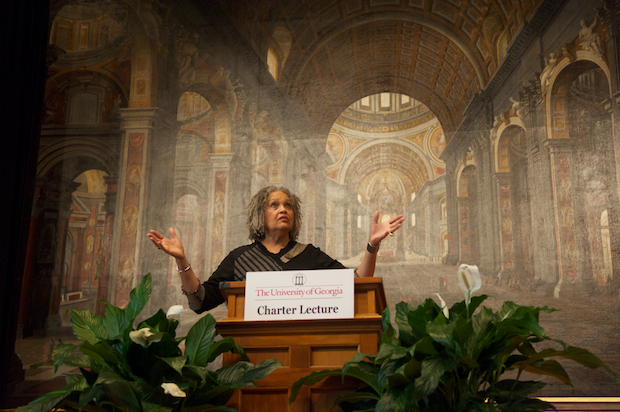 Wilson has also seen others, like himself, find a home at UGA.

“I tell students of color all the time that their reservoir of loving this place is no different than anyone else’s. You can come here and ‘woof, woof, woof’ just as loud as anyone else and that doesn't change because of the color of your skin,” he said.

In the future, Wilson would like to see a greater critical mass of African-American, Hispanic and Latino, and Native American faculty members at UGA, in addition to greater financial support from African-American alumni.

“I know alums who said they had a wonderful experience but aren't giving,” Wilson said. “I am a donor so I go to donor events but it is frustrating because I am sometimes the only African American there. We need to get those alums from the ‘70s and ‘80s back and engaged.”

Despite the numbers, Hunter-Gault said she believes UGA has shown a commitment to increasing diversity. And Wilson agreed

The arrival of Hamilton Holmes and Charlayne Hunter on the University of Georgia campus to register for classes on Jan. 9, 1961 marked the beginning of the desegregation of the first public, land grant institution in the Deep South.

February 14 is, in addition to Valentines Day, also the birthday of one of the United States’ most celebrated African-American activists — Frederick Douglass.

A month into her spring semester in Italy, Rita Ebhaleme, junior at the University of Georgia, ate enough pasta in a week to last her a lifetime, learned about the local wine industry and explored the city of Verona.

A crowd gathered to listen as Sanford D. Bishop Jr., United States congressman from Georgia, delivered the 2016 Holmes-Hunter Lecture in the c…

Before Holmes and Hunter: Students look at UGA's history of segregation and slavery

Last semester, Dr. Scott Nesbit, a professor of public history and technology, created a class project to research the history of the enslaved black men and women at the University of Georgia.

The 14th annual Martin Luther King Jr. Freedom Breakfast was held on Friday in Tate Grand Hall. Every year, nearly 600 leaders in both the Athens-Clarke County and University of Georgia communities gather to reflect on the legacy of Dr. King and the issue of diversity.

This was also about the system of access to higher education. However, the Americans immediately faced with a very delicate circumstance, namely: Negros because of their insufficient compared to the white level nya intellectual development could not pass the entrance exams and enter the UNIVERSITY. Instantly raised a fuss about the fact that blacks do not specifically take into institutions and universities, and in order to extinguish the conflict by the US government adopted a Pro-gram of "Affirmative Action" ("Counter-action"), which provided for the introduction of appropriate quotas and privileges for blacks, Latinos, etc. In such General ways, very far from reasonable, the Negro climbed in American Universities. Showbox