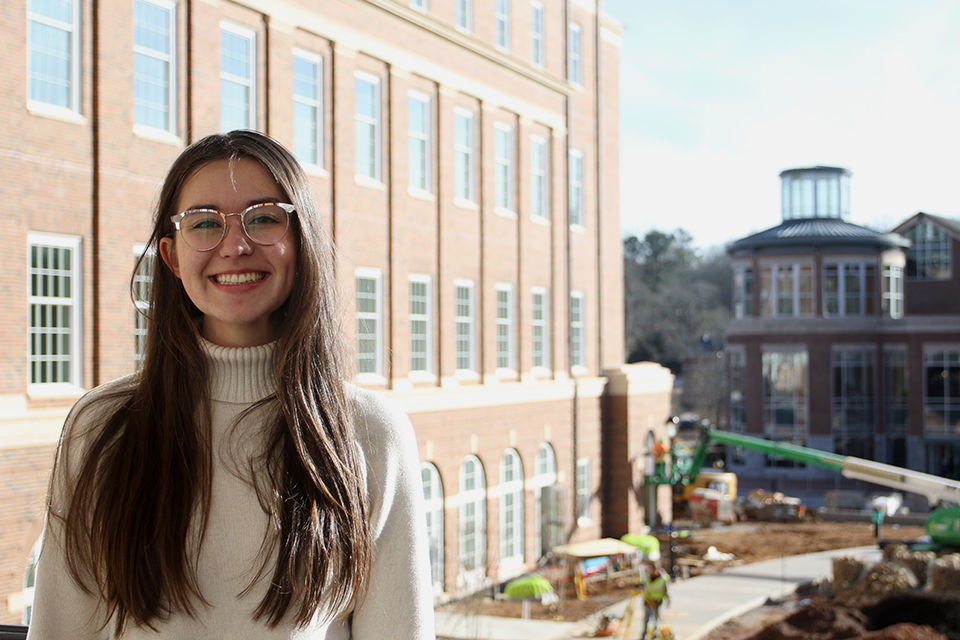 Kaitlin Lutz, a senior marketing major from Smryna, Georgia, poses for a portrait at the Terry College of Business at the University of Georgia on Friday, Jan. 25. Lutz received $5000 through UGA’s Idea Accelerator aiding her to start her idea, "Spark Women," a project to help equip women for the construction industry. (Photo/Tony Walsh) 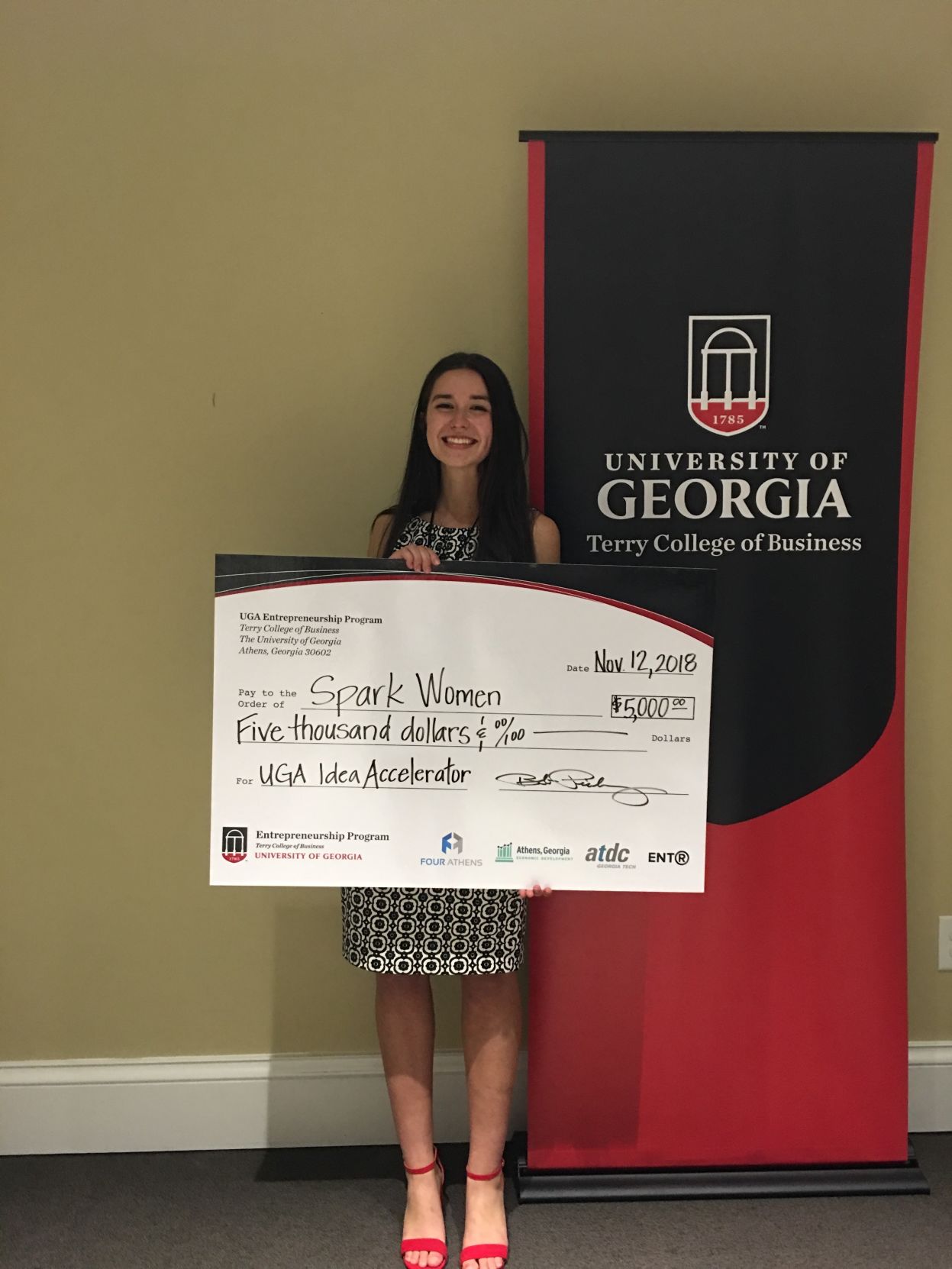 Low numbers of women in the construction industry inspired Kaitlin Lutz to pitch UGA Idea Accelerator her idea of a construction training program for women.

Kaitlin Lutz, a senior marketing major from Smryna, Georgia, poses for a portrait at the Terry College of Business at the University of Georgia on Friday, Jan. 25. Lutz received $5000 through UGA’s Idea Accelerator aiding her to start her idea, "Spark Women," a project to help equip women for the construction industry. (Photo/Tony Walsh)

Low numbers of women in the construction industry inspired Kaitlin Lutz to pitch UGA Idea Accelerator her idea of a construction training program for women.

Kaitlin Lutz, a senior marketing major at the University of Georgia, is the first woman soloist to win UGA’s Idea Accelerator Program. She won $5,000 to fund her business idea: Spark Women, a program that trains and equips women with skills for jobs in the construction industry.

“[I] realized there is a huge deficit between the amount of skilled workers that are needed specifically for commercial construction industries…[and] the amount of people that are able to fill them,” Lutz said.

The Idea Accelerator Program is a competition where anyone, despite their major and even if they are not a student, test their business ideas or expand their existing business. It is a collaboration between the UGA Entrepreneurship Program, Four Athens, and Georgia Tech’s Advanced Technology Development Center.

Since its founding in 2014, the program takes place in both the fall and spring semester. Lutz is the winner for the ninth session which was in the fall 2018. She competed by herself against more than 50 teams. The teams eventually narrowed to six, which pitched their final ideas to a panel of judges.

“[I] realized there is a huge deficit between the amount of skilled workers that are needed specifically for commercial construction industries…[and] the amount of people that are able to fill them."

Lutz entered the competition with the idea to do something with microloans for low income entrepreneurs, but after multiple interviews she found that her idea was not working. With only two and half weeks left, she searched for another pitch.

“My parents flip houses, and they have people on salary with them who are construction workers. I knew that they made a lot of money,” Lutz said.

However, as she researched, she found there is a shortage of skilled workers. According to a national survey conducted by the Associated General Contractors of America, 70 percent of construction firms surveyed in 2017 had difficulty filling “craft positions,” which make up a majority of the construction workforce.

Lutz also found that the number of women who work in construction is extremely low. Women make up about 9.1 percent in jobs for the construction industry, according to the Engineering News-Record.

“I just thought it was really interesting, and didn't really seem to make sense,” Lutz said. “Especially with the fact that, you know, women are so empowered to go and like do jobs, or in a man's world.”

Lutz is currently focusing on interviewing workers, especially female workers, to understand their perspectives and how she could help the problem.

One of those workers is Jessica Webber, who owns Webber Development and Construction. She partners with her father and has been working in the residential construction business for about 14 and 15 years. She has personally seen the deficit of female workers.

Although there are women who work in the design side of construction, she only knows one female in her area who does skilled labor such as laying tile.

“There's a huge gender gap...a lot of it's just education. People don't know that this is a good business to be in,” said Webber.

She started in the construction business when she was 18 years old, and Webber faced hardships as she was new and female.

“I definitely felt like I struggled. Not that I think anyone maybe intentionally did anything to make it hard for me. I think they were ignorant…” Webber said.” And I really felt like I had to prove myself over the years.”

Susan Rancifer, another interviewee, is a project manager for Lichty Commercial Construction, Inc. She has been in the construction business for about seven years, and she deals with various aspects of the construction process such as contracts, insurance and permits. Rancifer holds a different perspective regarding the gap between female and male workers.

“There were times I could go to a meeting and be one of three women,” said Rancifer. “Now I could go to a pre-bid meeting...I could be one of seven…or ten women. There are just more women represented even in the seven years I’ve been in the industry.”

Rancifer noted how there are organizations and conferences now that train and build connections for women in the construction industry similar to Lutz’s idea.

“Women are trainable in any industry including construction and it’s a great concept which I hope [Kaitlin Lutz] brings to fruition, training more women...if the economy is good, the jobs are there,” Rancifer said.

At the moment, Lutz has put the prize money away in hopes to use it after she graduates this semester.

She said there may be potential with Athens Technical College as she hopes to partner with them and create a dual training program before creating her own program. Lutz also hopes eventually, she can become a labor source for companies in the future.

“I'm definitely thinking Georgia, and [in] Athens there is a lot of need here..the community here is really great,” Lutz said. “There's a lot of really, really great support for businesses, but also the construction industry.”

The quick-witted, charming University of Georgia student is remembered by family and loved ones after a fatal car accident on Jan. 17.

Briana Hayes was crowned Miss University of Georgia 2019 on Jan. 12 at the conclusion of the annual Miss UGA Scholarship Competition. Karson Pennington and Irielle Duncan were first and second-runner ups, respectively.

UGA Gamers unite! The Tate Gameroom opens to the public

On Tuesday, Jan. 8 at 1:15 p.m., the Tate Student Center unveiled a new gaming center, located in the space previously occupied by Dawg Snacks across from the Tate Theater. Students and employees alike gathered in the gameroom, reminiscing on carefree memories of their childhood.

For the first time in Athens, the Wildlife Resources and Education Network will host a symposium for wildlife professionals on Feb. 2-Feb. 3 and a workshop for the public on Feb. 2. The lecturers at the symposium and workshop will discuss topics ranging from reuniting young wild mammals to white-tailed deer rehabilitation.

While football fans from across the country rush to Mercedes-Benz Stadium in Atlanta for Super Bowl LIII on Feb. 3, University of Georgia sport management majors are kicking off an experience of a lifetime.

Funded by Charlayne Hunter-Gault and Ron Gault, the Giving Voice to the Voiceless Fund allows selected UGA students from all academic disciplines an opportunity to promote the welfare of voiceless communities within Athens and beyond.

The Three Minute Thesis competition is an annual competition for master’s and doctoral students to communicate their research in just three minutes. On Feb. 25 at 12:15 p.m. in room 200C of the Geography/Geology room, the graduate school is holding an information session for interested students to learn more about 3MT. The competition provides students with more than just a chance to win a cash prize. It allows students to develop their presentation and research communication skills.

On April 15, the University of Georgia’s Entrepreneurship Program hosted UGA Idea Accelerator Demo Day. Nine teams presented their business ideas in three minutes in the hopes of winning the first-place prize of $5,000.

Women have long been an underrepresented and underpaid group in financial fields. UGA and the Terry College of Business can be leaders in fixing these inequalities.