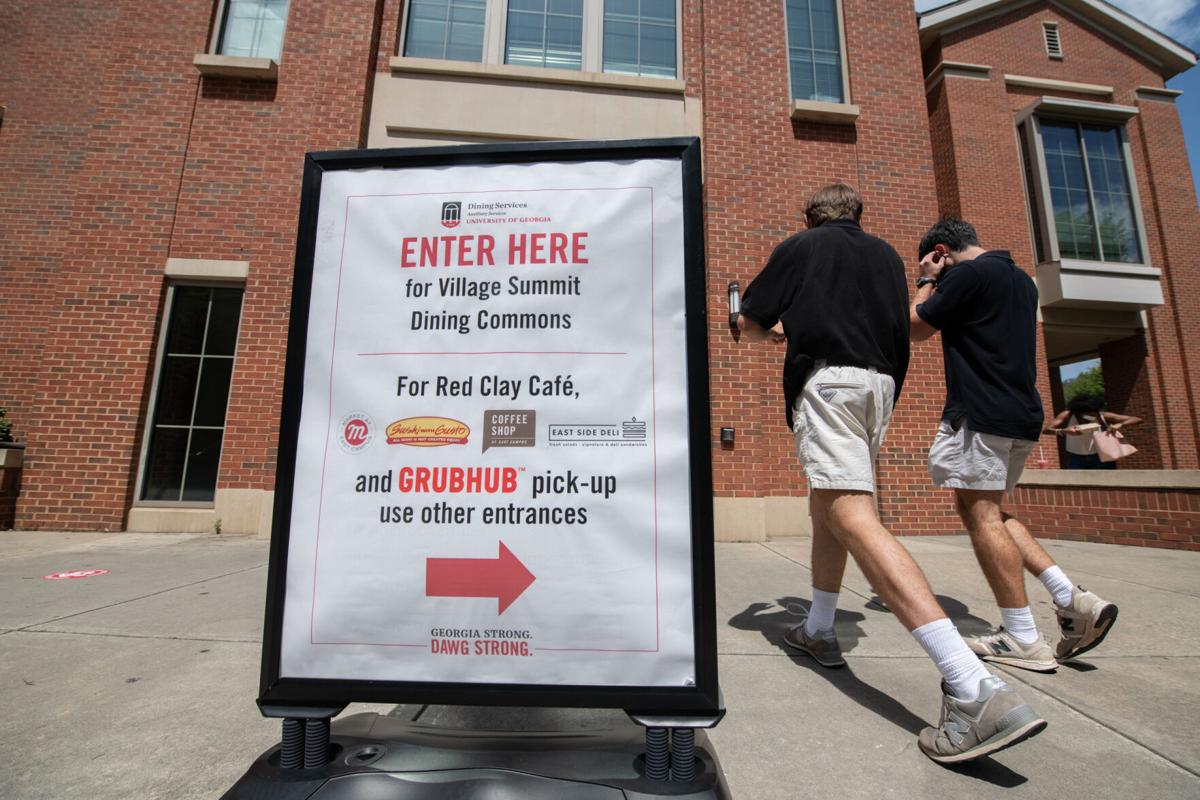 Two students walk toward Joe Frank Harris Dining Commons on the University of Georgia’s campus on Wednesday, Sept. 2, 2020, in Athens, Georgia. Dining room reservations can be made on Grubhub, but all dining halls have also pivoted to a to-go order system during the COVID-19 pandemic. (Photo/Julian Alexander, jalexander@randb.com) 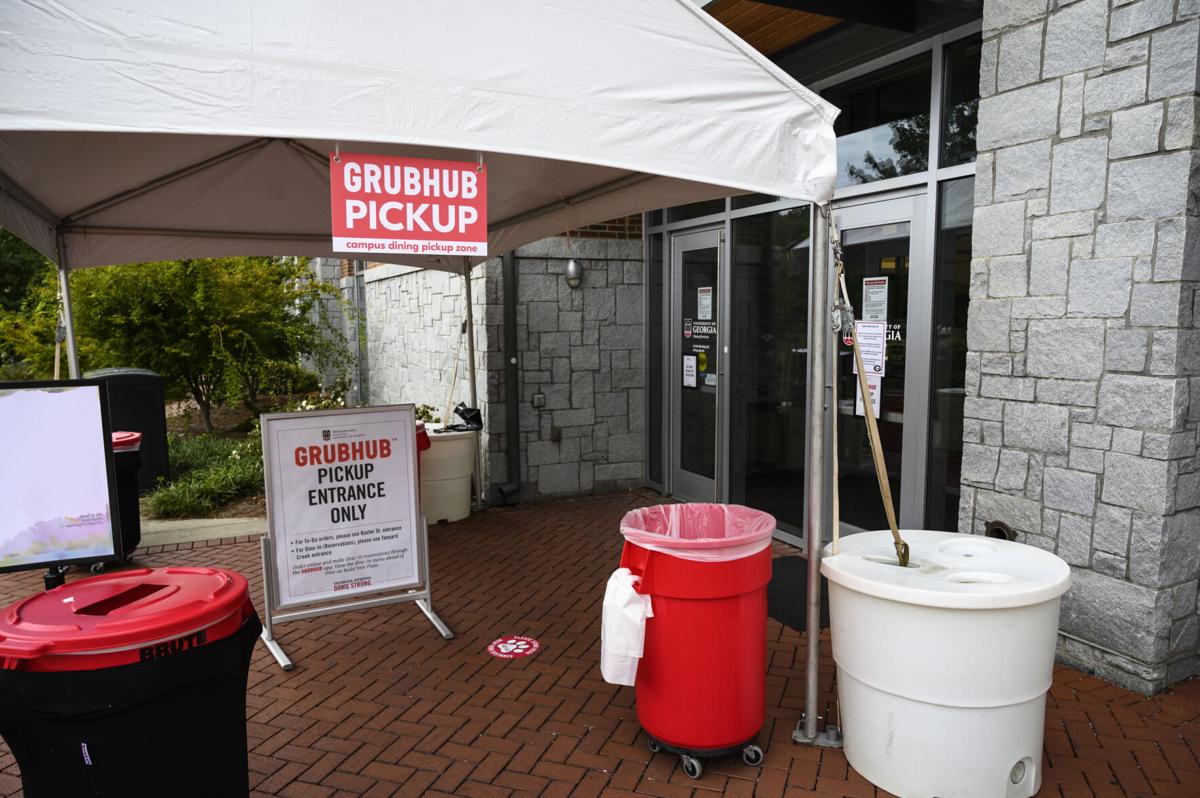 A food pickup station is set up in front of Bolton Dining Commons on UGA's campus in Athens, Georgia, on Aug. 24, 2020. The dining rooms of the dining halls are open for reservations through the Grubhub app. (Photo/Taylor Gerlach; @taylormckenzie_photo)

UGA students talked to The Red & Black about their experiences with the new dining hall modifications that have been implemented to protect against the spread of COVID-19 on campus.

UGA Dining Services has made significant changes to on-campus dining, including limiting inside seating to those with a reservation, Grubhub order and pickup, quick stop stations and new hours.

“I’m kind of wanting to be careful and not get [the coronavirus],” Zachary Hirsch-Santagata said while standing outside Bolton Dining Commons before getting his lunch. “But if I get it, I think this is where I'll be subject to getting it.”

Hirsch-Santagata, a freshman biological science major from Doraville, said “nobody listens” to the stickers on the floor of the dining hall lines reminding students to stay 6 feet apart. Without employees continuously monitoring distancing, students gather in groups in the lines, he said.

Despite her friends being nervous, Anna E. Mercer, a sophomore communication sciences and disorders major from Augusta, said she’s been through the to-go lines in the dining halls. Mercer said in the dining halls, she feels safe.

To mitigate long lines at Bolton before classes started, Dining Services opened Oglethorpe Dining Commons on Aug. 19, a day earlier than originally planned. O-House was opened early for to-go and Grubhub pickup only, then opened for reservation seating on Aug. 20.

Brooks Donaldson, a sophomore history major from Norcross, said the lines at O-House were long and moved slowly the first day it opened, and many students weren’t socially distant in the lines. He said he didn’t think O-House opening early helped mitigate volume at dining halls like Dining Services intended. Donaldson said the lines have gotten better as of Aug. 28.

Dining Services suggested in multiple emailsfor students to go to the dining halls outside of “peak times,” which they said are 11 a.m. to 2 p.m. These peak times are during typical lunch times, when the dining halls are most crowded.

“I'm going, I don't know what time it is, like three o'clock, to get lunch, and then I'll get dinner in like an hour. Yeah, so I feel like if you avoid 12 o'clock and avoid seven o'clock, you won't experience any lines,” Hirsch-Santagata said.

Donaldson said going to get food at O-House at certain times can lead to waiting in long lines or having to go eat at a different time. Donaldson said he chose to live in Oglethorpe House because of its proximity to the dining hall, but he’s only been able to go a few times because of the negative experience.

What a UGA meal plan looks like during COVID-19

“It's limited to just like these really bad sandwiches without any toppings, like no lettuce, no vegetables, no condiments,” Donalson said. “And then lately, they haven't even been getting the orders right… the money just doesn't really match the service,” Donaldson said.

Dining Services rolled out a new block meal plan this year, a week before the first day of class. The plan comes with 180 blocks per semester and has the option of adding 300 Paw Points. The number of blocks equates to about two meals per day, according to Dining Services. The new 180 block plan with 300 Paw Points costs $3,984 per year.

Baylor Aycock, a freshman marketing major from Milton who has the new 180 block meal plan, said she thinks the meal plan is worth the money. With her Paw Points, she can go get Chick-fil-A when she wants to, she said. Hirsch-Santagata said he tries to get the most he can out of the meal plan, but next semester, he sees himself bringing more food of his own.

“I think, under the circumstances right now, they're kind of just trying to do their best with what's going on right now,” Pellock said. “I was a little disappointed, just because of what I was expecting going into it, but I think I'm getting used to it.”

‘It’s a problem’: How COVID-19 is affecting the environment in Athens and worldwide

Masks, gloves and sanitizing wipes have all become common sights as people use them as protection against COVID-19. As a result, COVID-19 is causing negative environmental effects around the globe and in Athens.

Over the course of the pandemic, individuals with a past history of eating disorders noted concerns of relapse brought on by COVID-19 circumstances, according to a 2020 study published by the International Journal of Eating Disorders.

The University of Georgia released an ArchNews email almost one month after classes started announcing a new COVID-19 calculator, Dining Services updates and a new Peer Allies program for freshmen and transfer students.

The University of Georgia Dining Services is implementing a limited amount of first come, first serve dining inside the dining halls and new menu items, including Taco Tuesday and breakfast options, according to a Tuesday email.