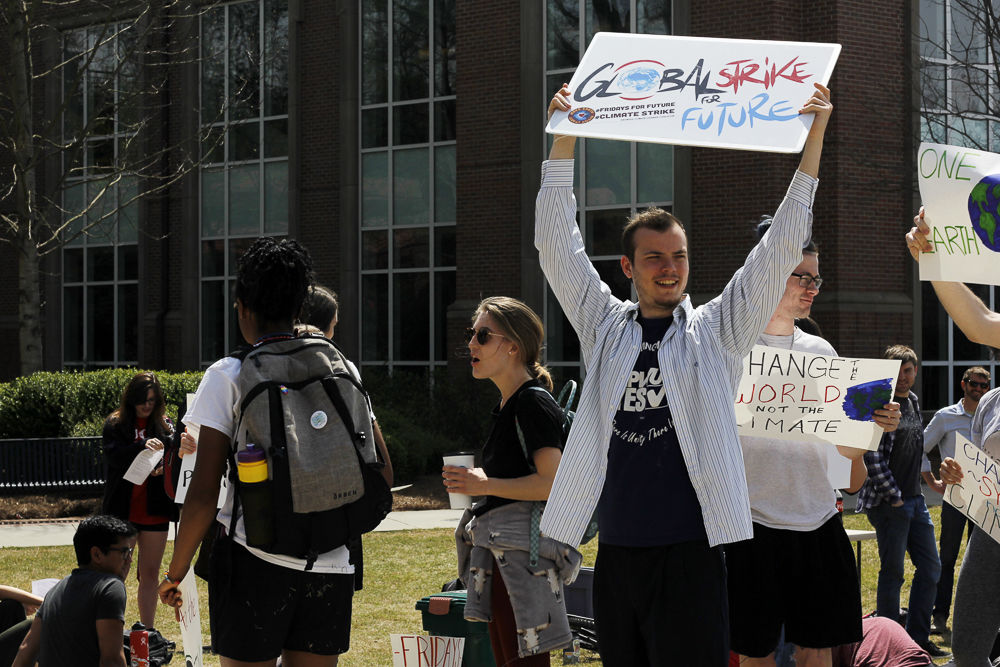 Chris Tidwell, a philosophy student at the University of Georgia, protests during the Climate Strike in Athens, Georgia, on Friday, March 29, 2019. Students and community members gathered to protest climate change and lack of policy as part of a bigger movement started by Swedish 16-year-old Greta Thunberg. (Photo/Rebecca Wright) 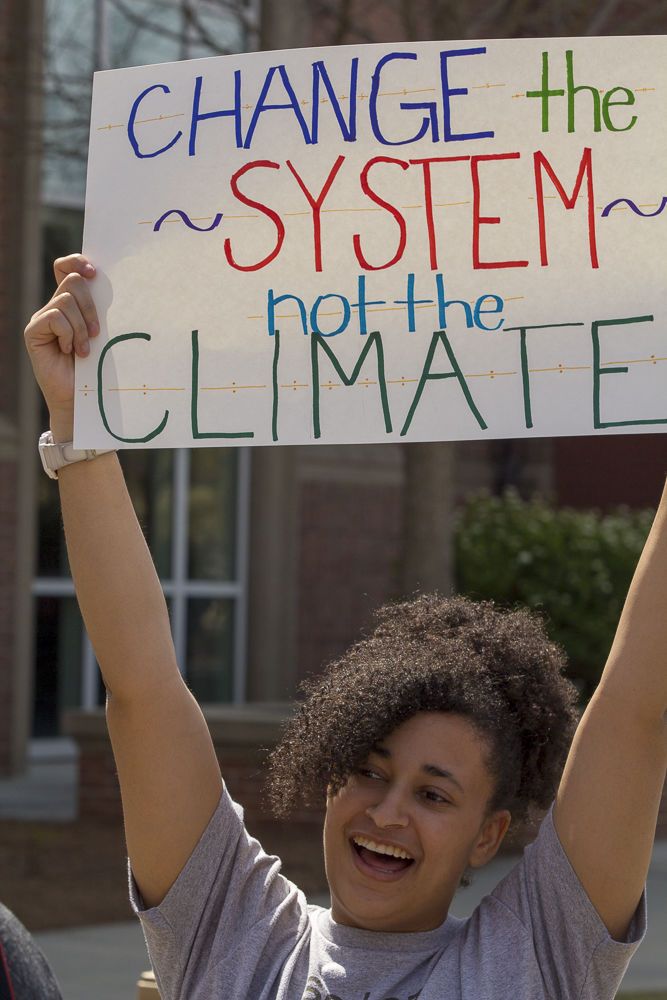 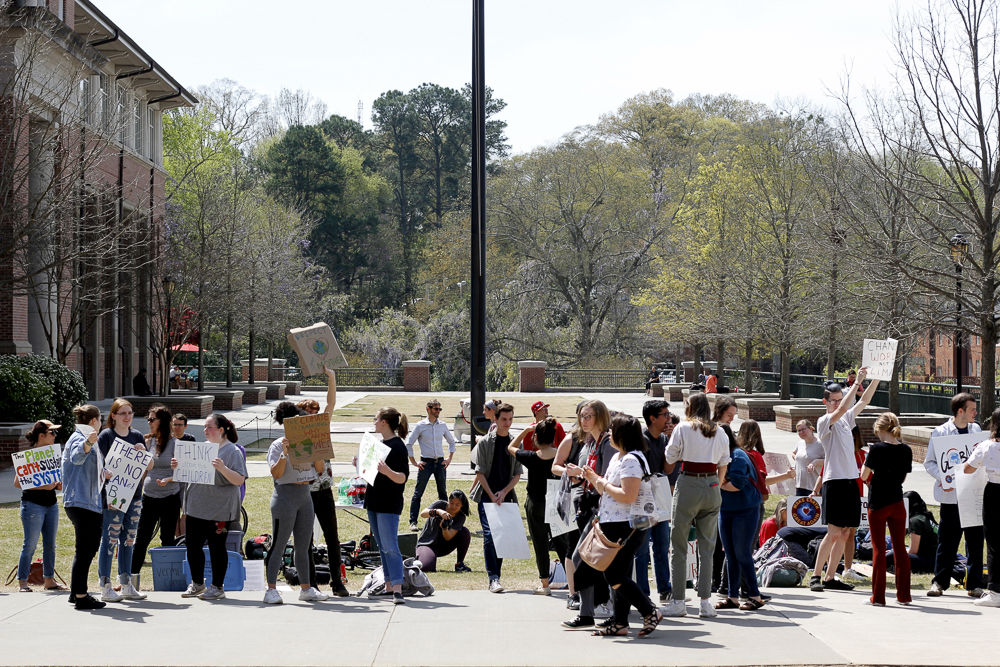 Chris Tidwell, a philosophy student at the University of Georgia, protests during the Climate Strike in Athens, Georgia, on Friday, March 29, 2019. Students and community members gathered to protest climate change and lack of policy as part of a bigger movement started by Swedish 16-year-old Greta Thunberg. (Photo/Rebecca Wright)

Approximately 50 students, professors, and local activists gathered outside Tate Student Center from noon to 3 p.m. Friday to bring awareness to climate change. Free pizza from Little Italy was provided, half of which was donated by the restaurant, in return for asking a question or stating a fact about climate change.

Junior ecology major Mary Grant Hall organized the student Walk Out for Climate Change over Facebook. She was inspired by 16-year-old Greta Thunberg, a Swedish activist who addressed the United Nations last year on the urgency of climate change and how it will impact future generations.

“As an ecology major, I’ve learned a lot about climate change … and what that means. You hear about it … but you don’t really necessarily understand the consequences and the severity of those consequences,” Hall said, “If a 16-year-old girl from Sweden can cause this huge movement, I don’t know why UGA hasn’t gotten involved.”

Tose Akinmola, a sophomore biology and psychology major, stood holding a sign that read, “System change, not just personal change.” She cited a 2017 report by the Carbon Majors Database that said 100 corporations were responsible for approximately 71 percent of global emissions.

“You can recycle as many plastic bottles as you want, you can just go vegan if you want, you can do all these different things,” Akinmola said. “But the only thing that’s gonna make a dent in our climate catastrophe is if corporations take responsibility for their actions.”

“Corporate oligarchs, CEOs, billionaires, people that run our states and governments, they’re the ones that are acting in interests that go against the entirety of humankind because they’re endlessly pursuing profit, and that’s costing us our planet,” Hulett said.

Mark McConnell is the executive director of the Georgia Climate Change Coalition and worked in tandem with Hall to organize the event.

“This is the future of the young people that we’re talking about. The quality of life and the quality of the environment go hand in hand,” McConnell said, “One and a half million kids walked out of school last Friday around the world. It’s time for the United States to step its game up and become a world citizen instead of being a world idiot.”

Currently, the Georgia Climate Change Coalition has a goal of sending 200 letters by April 8 to Georgia’s Public Service Commissioners to press Georgia Power for less fossil fuel use, McConnell said. In 2011, Georgia Power’s Plant Scherer in Monroe County was the largest point source of carbon emissions in the country, according to Environment America.

One UGA professor even brought his class out to attend the strike. Dan Everett is a part-time faculty member and teaches a class called Computer Modeling for Sustainability. Everett said his class works with with models, like Excel spreadsheets, to track and predict things of environmental concern, such as the time it might take for electric cars to “take over.”

“We’re building a community of University of Georgia students who are going to not only do a lot of things while they’re here, but after they graduate, they’re going to be powerful influences in our culture, to move us away from fossil fuels,” Everett said.

A nation on pause: Athens and UGA navigate the direct effects of the federal shutdown

From dried up research grants to dwindling funding for community organizations, locals feel the effects of the partisan stalemate from thousands of miles away.

Athens activists and UGA faculty spoke to an audience of about 70 UGA students and Athens residents at the Athens Earth Strike First Day of Action event on Jan. 15.

The first University of Georgia Signature Lecture series of the spring semester, hosted by the College of Engineering and the Institute for Resilient Infrastructure Systems, featured former Federal Emergency Management Agency administrator Craig Fugate. He discussed his “seven deadly sins” of emergency preparedness at the Coverdell Center Friday.

You're listening to The Red & Black's News & Brews, a weekly recap of Athens and University of Georgia news and a look ahead to some i…

I know, you've probably never heard of permafrost before. But if the permafrost melts, you're going to know about it.

OPINION: Climate change must be at the forefront of the 2020 presidential election

There's no more time to avoid discussing one of the biggest issues humanity will face. The next president must tackle climate change, and so all candidates must talk about the issue.