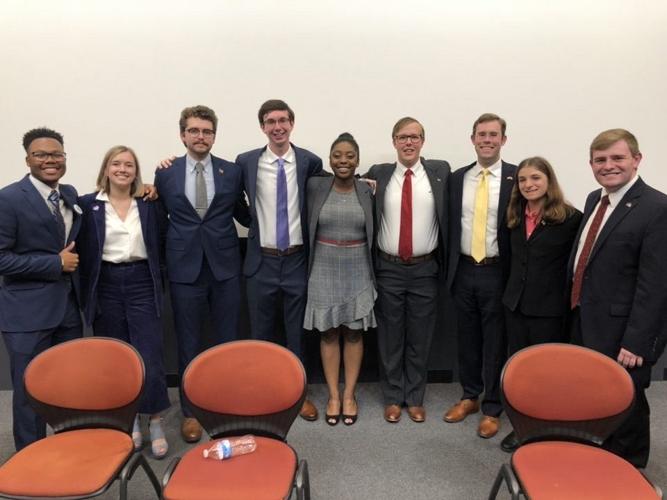 Members of the Young Democrats of UGA (left) and the UGA College Republicans (right) at 2019's great debate on Oct. 23. 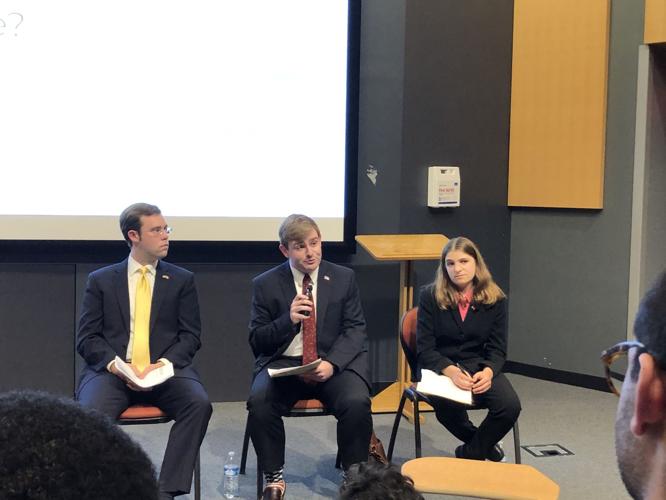 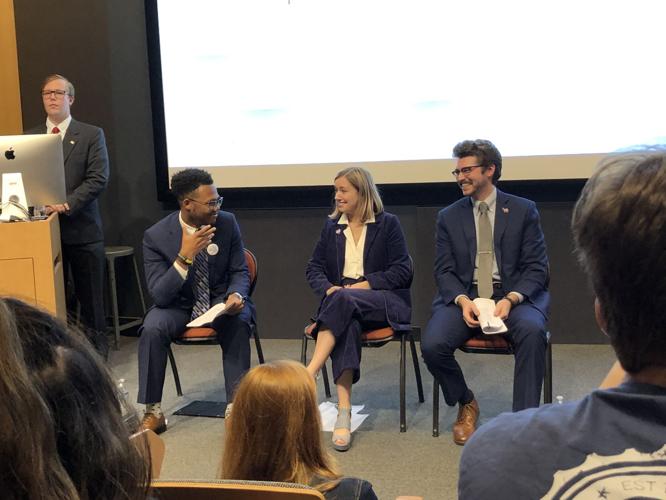 Will Harris, Alison Canaras and Matthew Brantley (left to right) represented the Young Democrats of the University of Georgia at the annual Great Debate on Oct. 23, 2019.

On Oct. 23, the Young Democrats of the University of Georgia and the UGA College Republicans faced off in the annual Great Debate, co-sponsored this year by UGAvotes and Georgia Political Review.

In front of a packed crowd of around 350 spectators, both Young Democrats and College Republicans had three representatives on stage. They answered questions directed at both parties with a two-minute time limit and questions directed to one party with the allowance of a one-minute rebuttal. Each party was allotted equal time during the debate.

“I think it’s really important for students to be informed and really understand not just the issues but why they feel the way that they feel about certain issues,” said Harris. “Something like this is a really great forum ... for them to hear different perspectives on all of these issues, and then make their own conscious decisions.”

The debate consisted of questions from seven categories: the economy, education, healthcare, social policy, the environment, foreign policy and immigration. The two teams were informed of the broad categories prior to the debate but did not know the specific questions.

In general, both the Democrats and Republicans aligned with their party’s stance. In their opening statement, College Republicans Chairman Ethan Pender stated that “individual freedom and personal liberties reign supreme.” Will Harris, a member of the Young Democrat membership committee, said in their opening statement that they “stand on values that make America better, more equitable and more prosperous for everyone.”

There were some instances of agreement between the two parties on specific aspects of certain issues, including the need to eliminate dependence on foreign energy supplies, performing background checks when buying guns and decriminalizing addiction treatment. However, in general, the parties held opposing opinions about the debate topics.

Some issues were more divisive than others. When debating topics such as the Green New Deal, immigration and healthcare, the crowd’s response was audible as spectators expressed their support or dislike for the debaters’ statements.

Immigration proved the most polarizing with the loudest crowd response. The parties had dramatically different stances concerning immigration, with the Republicans advocating for the construction of a border wall and the Democrats advocating for the abolishment of U.S. Immigration and Customs Enforcement. With a crowd made up of mostly Democratic supporters and a sizeable number of Republican supporters, the response to both statements was distinct.

The closing statements of the two parties echoed their stances during the debate, both stating that their party stands for freedom.

“This is a party in transition, moving towards a progressive agenda that overwhelmingly values and actively fights for the freedoms of each and every one of you,” said Young Democrats President Matthew Brantley. “We believe in a just and equitable society.”

“Republicans stand for freedom and free markets,” said Nick Lewis, fundraising director of College Republicans. “We believe that a government closest to the people serves the people the best, that decisions affecting us should be made by individuals and communities.”

Members of the crowd expressed their feelings about the debate.

“It was super interesting to see both sides be so passionate but also respect each other,” said freshman music therapy major Waverly Noble. “It was really cool to see how excited everyone got about something political on campus.”

After the event, representatives from both parties voiced their opinion on the Great Debate.

“The Republicans stuck to their talking points, and we, for the most part, advocated for American interests broadly across society,” said Brantley. “It was about par for what I expected.”

“I felt like we represented the positions of our party very well,” said Robyn Anzulis, activism director of College Republicans. “We’re really grateful that the Democrats came out and debated us. We feel it’s really important to continue having these conversations in order to improve our country.”

Gov. Brian Kemp was greeted by a barrage of handshakes and selfie requests when he entered a room full of University of Georgia students at the Zell B. Miller Learning Center on Oct. 16.

In the midst of his candidacy for one of two U.S. Senate seats up for grabs in Georgia in 20…

On Oct. 8, senior computer science major Richard Red’s walk to class was interrupted by the …