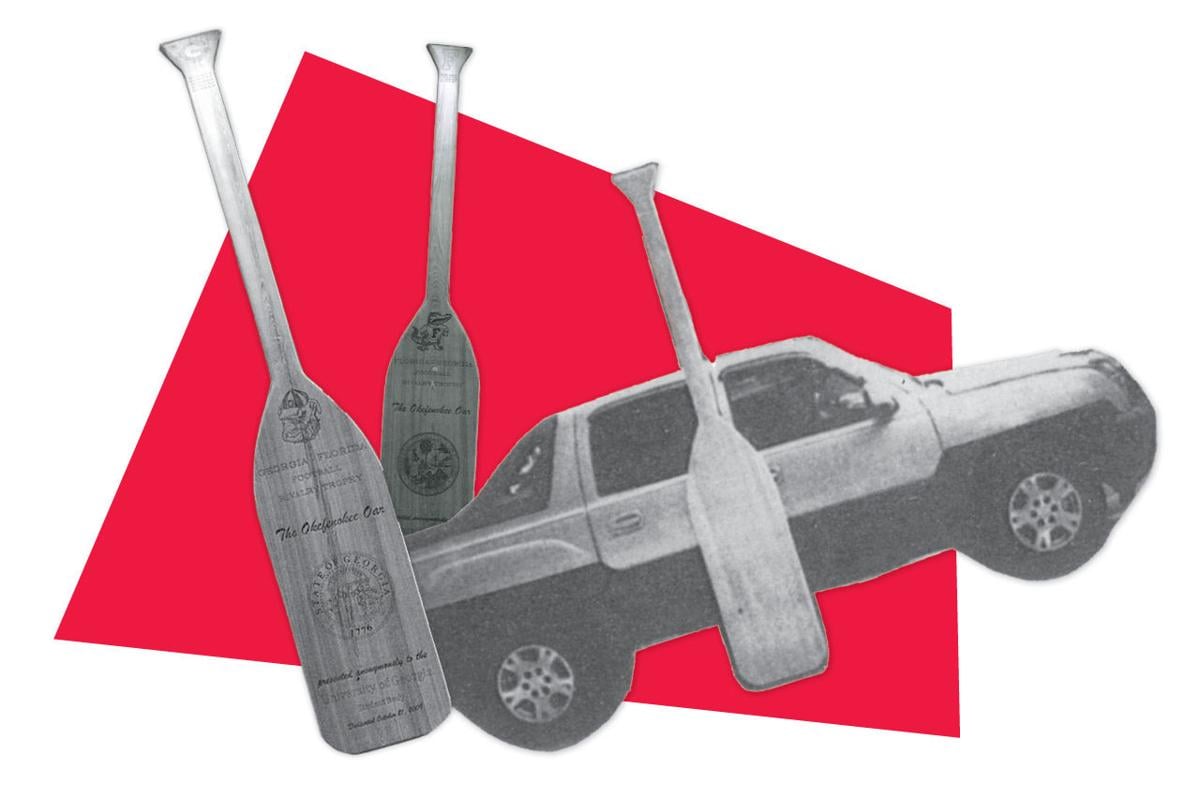 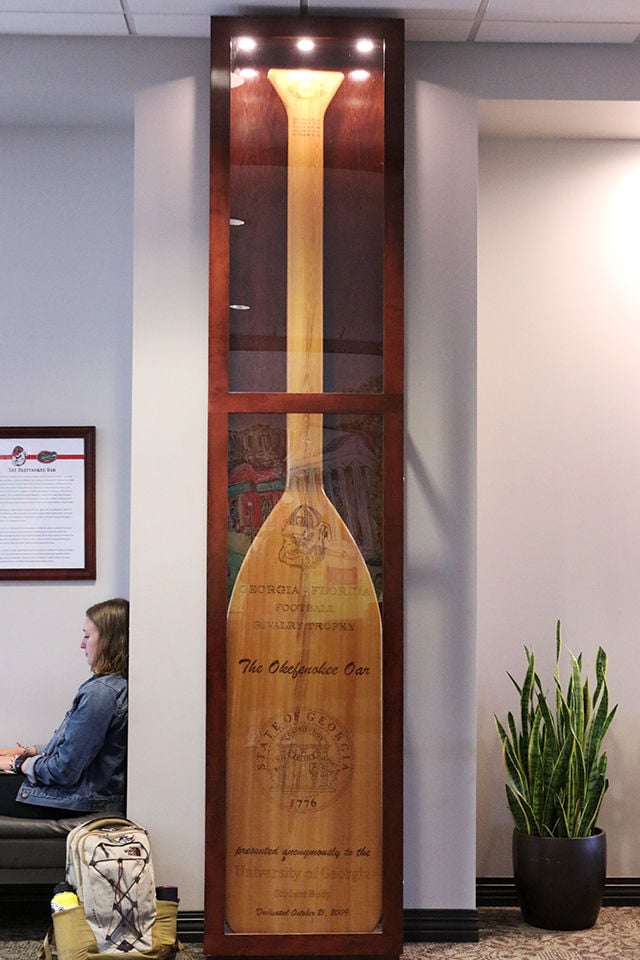 The Okefenokee Oar displayed in the Tate Student Center in Athens, Georgia, on Monday, Oct. 14, 2019. The oar is significant to the Georgia/Florida football rivalry. (Photo/Caroline Barnes) 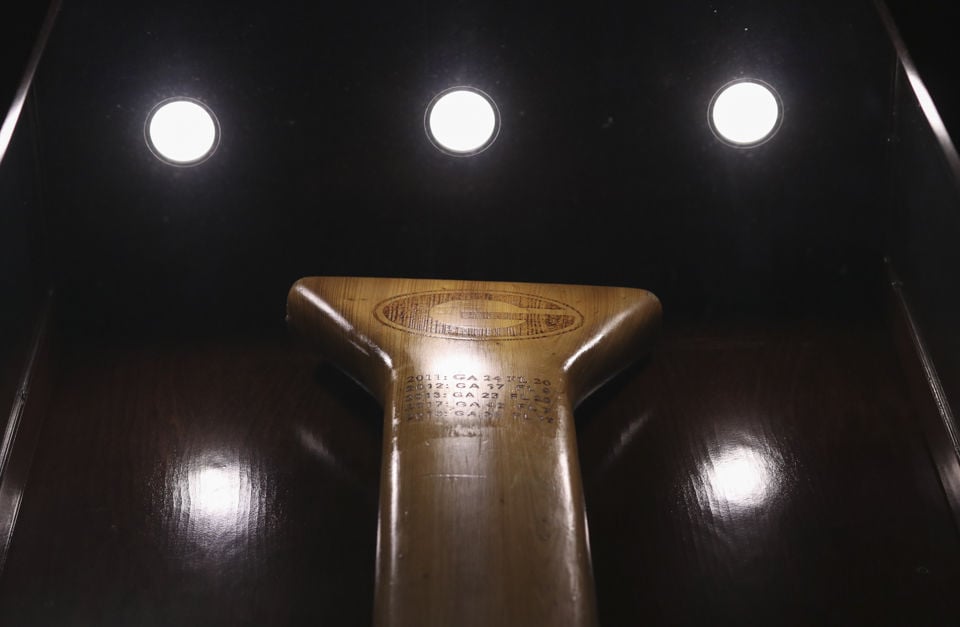 People walk past the Okefenokee Oar displayed in the Tate Student Center in Athens, Georgia, on Thursday, Oct. 10, 2019. The oar is significant to the Georgia-Florida football rivalry. (Photo/Caroline Barnes) 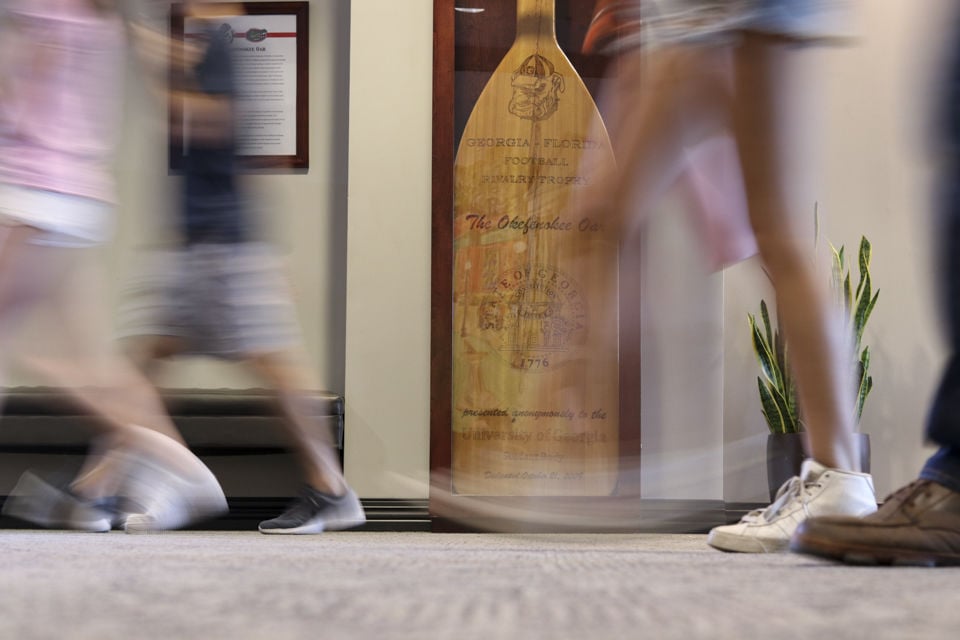 People walk past the Okefenokee Oar displayed in the Tate Student Center in Athens, Georgia, on Thursday, Oct. 10, 2019. The oar was created by the Student Government Associations of University of Georgia and University of Florida as a symbol of their rivalry, and it is kept at the school who won their yearly game until the next meetup. (Photo/Caroline Barnes) 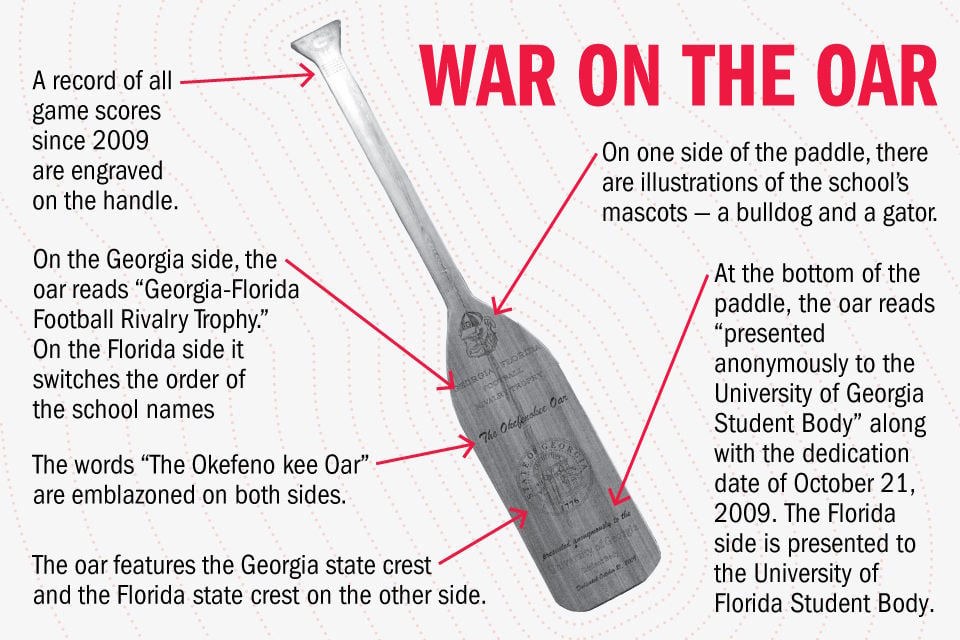 Instead of a trophy, the winning team of the Georgia-Florida game is awarded the 12-foot wooden oar, which resides at the winning university until the next rivalry game.

A sense of pride isn’t the only thing at stake this year at the Georgia-Florida football game. Also up for grabs is the Okefenokee Oar, a tradition in the annual rivalry game since 2009 when the student governments of the University of Georgia and the University of Florida collaborated on the creation of the oar.

Instead of a trophy, the winning team is awarded the 12-foot wooden oar, which resides at the winning university until the next rivalry game. The oar is carved from a 1,000-year-old cypress tree felled from its namesake swamp, an area that has been fought over since colonial times by Georgia and Florida. According to an October 2009 article in The Red & Black, the creation of the oar was funded by the student governments of UGA and UF, along with an anonymous donor.

This year, the oar will make the journey to Jacksonville on Nov. 2 along with the UGA football team for the annual rivalry game.

The words “The Okefenokee Oar” are emblazoned on both sides. On one side of the paddle, there are illustrations of the school’s mascots — a bulldog and a gator.

On the Georgia side, the oar reads “Georgia-Florida Football Rivalry Trophy.” On the Florida side it switches the order of the school names. A record of all game scores since 2009 are engraved on the handle.

Chomping at the bit: Georgia-Florida matchup will have big ramifications in the SEC

When UGA and Florida face off in Jacksonville on Nov. 2, they will have a lot behind them. They have a history filled with a bench clearing celebration, attempts to run up the score and strange timeouts.

Georgia football not concerned about offense ahead of Florida game

Head coach Kirby Smart and the rest of the Georgia football program aren’t worried about their offense.

Set against the backdrop of a segregated south and a newly-integrated University of Georgia,…

Georgia and Florida dispute when their rivalry began. A look at the history of the series, however, shows that Georgia should concede that Florida is correct.

The National Science Foundation has awarded researchers with the University of Georgia’s Center for the Ecology of Infectious Diseases a $1.6 …