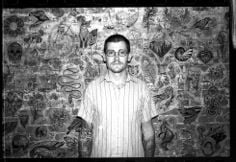 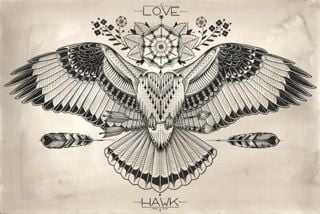 As a reputable artist known for his distinctive tattoo style and community involvement, the owner of Love Hawk Studio on Tracey Street is displaying his creative works on Nov. 8 in his studio. David Hale is one of Athens’ most widely known artists and is showcasing a large collection of limited prints and works.

The art reception will be held at Love Hawk Studio from 6 to 10 p.m displaying a large collection of original drawings and limited edition screen prints, all of which play off of the folk experience. Hale said “Simple Gifts” is the title of an old Shaker dance song he heard when he was younger. This past winter, Hale participated in a four day silent retreat with his dad and heard “Simple Gifts” once again during one of the meditations.

Hale began his artistic ventures as a child. Art became not only his creative background, but an integral part of his life.

“I started drawing and painting, using any materials I could find from the time I was in kindergarten. It’s inherent to my nature, to draw with whatever I could pick up. I remember drawing with pieces of pine bark from the driveway,” Hale said.

From pine bark, Hale moved on to more formal art training during middle and high school. He drew for friends, dabbling with tattoo designs. In his high school yearbook, Hale recounted a photo of himself drawing. The caption read: “David Hale plans to pursue a career in art because art is the gateway for the soul.”

His inspiration to pursue tattooing came at age 13.

“I saw the album art for the Red Hot Chili Peppers “Blood, Sugar, Sex, Magic,” which had pictures of the band members’ tattoos. It was the first time I saw really good tattoos. Anthony Kiedis has these big Pacific-Northwest American Indian style tattoos and I was just blown away. I started drawing tattoos on myself, on my friends. I grew up in the suburbs and wasn’t exposed to much, but kept my eye on it. The day I turned 18, I got my first tattoo, a Pacific-Northwest style sun I drew, on my back,” said Hale.

Hale enjoys how tattooing is a drawing-based medium, but a highly interactive art form. He expressed his love for people and humanity, and said the profession suits his character.

“At that age, I think I was being pulled toward the purpose of my life. Looking back, I see how so much of my life was set up for me as a tattooer,” Hale said.

“We all are drawn to be creative, but that doesn’t make me special at all. I think it’s inherent in our nature. I choose to recognize this and pursue it, in the fact that I make visual art, but it’s my entire life. Because the source of us is from an act of creation, I think we all create and that’s what I hope to do with my art, how I hope to inspire people,” Hale said.

Hale feels that art is a higher calling for him as a spiritual practice. It’s not hierarchical, he said, but rather an intention that can be cultivated over time.

“My son, Crow, is my biggest art project,” said Hale.

Inspiration for the Love Hawk Studio name originated from a poem by the poet, Rumi. Hale said an Athens resident, Coleman Barks, is a renowned Rumi interpreter and translated the poem for him. David Hale’s name, or Love Hawk Studio, immediately calls to mind his artistic style, which is rooted in folk art.

“My current work is influenced by the vast experience, the visual experience of life,” Hale said.

He had an affinity for graphic art with comics and graphic novels growing up, and a persistent interest in animals and nature. He described the combination of a cross-cultural graphic art style with nature found in folk art.

Hale makes an effort to work in that manner, working through his heart.

“Art is difficult to define. I can’t make borders between artist and creation,” said Hale.

Seeing the art as the people see it is a challenge for Hale. He doesn’t recognize or adhere to what he thinks of as a particular style. Hale believes art should be inherently accessible to all. He feels that art is a collaborative process in all forms, a tool for creation. The music he listens to influences the drawings he produces.

“The more I’m influenced by all these people and experiences, the more accessible the work becomes. I can’t just try to voice my own opinion. My opinion exists in a seed of experience. Every artist, their voice comes through in a different manner. In any type of art, the more the artist practices true humility and gratitude, the more their art becomes something that’s much deeper than just a manifestation of the ego,” Hale said.

Hale has an atypical method of running his business. Unlike most other tattoo studios that accept walk-ins and requests for custom pieces, Love Hawk Studio does not. Because the volume of his clientele is so large, Hale created a system where people receive the art he creates as tattoos.

“I’m in this weird scenario where I have so many clients, I can’t accept them in the traditional manner. It’s forced me to be creative in the way I take clients. If I opened up the door, I would get thousands of requests,” said Hale.

Love Hawk Studio is operated solely by David Hale. He sends out a monthly email newsletter of his latest work, usually 10-20 tattoo designs. Potential recipients enter into a lottery system and wait to see if they are chosen. Hale chooses people at random. He said some people have very strong reasons why they want a particular tattoo he’s drawn, while others just submit their name.

“I put a lot of intention into the designs, to make sure they’re going to be excellent tattoos. I have faith that the right person will choose the design, and so far it’s worked out nicely. Every person has ended up with the exact tattoo they wanted,” Hale said.

Instead of being pressured to think about body placement, size and personal preferences, Hale is able to focus more intently on the art itself and said that the tattoos actually end up more personalized than if done in the traditional manner.

Hale donates $100 from each tattoo to a different charity each month. He gives $1000-2000 per month. Hale has no set fee for any single tattoo. He leaves it up to the clients to pay what they can afford. And even with $100 from each tattoo going toward charity, Hale said people respond well, that they give as much as they can.

“The most challenging and rewarding parts, for me [tattooing] is a spiritual pursuit. It requires that I am clear in all aspects of my life. I don’t consume caffeine, I don’t stay up late. I have to live a healthy lifestyle; it’s important to be present and clear for people," Hale said. "It causes a lot of introspection, which is a blessing and a curse. You’re giving yourself the life of creating from the soul, which means you have to work from your soul. It’s difficult."

Hale’s wife collaborates with him. She responds to nearly all his work. Hale feels they are tightly bound together as soul mates.

Many of the words from “Simple Gifts” appear on his artwork. He said the art visually represents how he feels about the song.

“It’s very stripped down as a song, it’s very simple. But there’s a complexity to it that gives it a mystical purpose. It’s a beautiful prayer. I’ve been carrying with me as a mantra. It brings me back to my heart,”  Hale said.

Frank Martin, a sophomore mass media arts major from Atlanta, is the innovative mind behind each football video.

Writing a 1,000 word paper in a week is challenging for most students, but imagine the daunt…

Turn Me On!: Winston returns to the spotlight in 'New Girl'

Given how solid Winston’s character has been recently, it’s about time he got an episode foc…

The Georgia Theatre will host the Georgia native folk group The Lone Bellow along with Foreign Fields and Kristin Diable for a night of relaxed, acoustic music on Nov. 6.