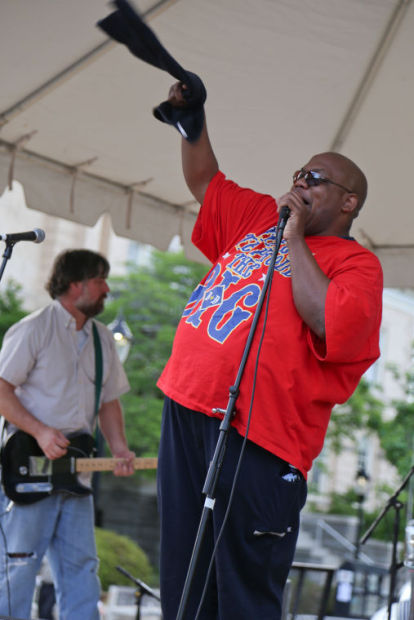 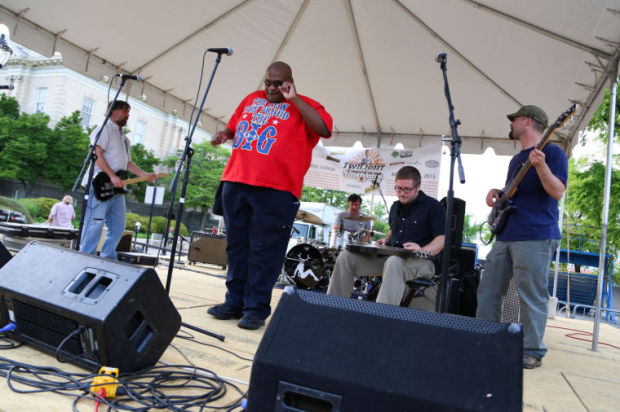 Blues, rock and R&B also make up Americana heritage, and Big C & The Velvet Delta brought them to the Twilight Americana Music Festival.

That isn’t to say the band’s performance was a history lesson. Frontman Clarence “Big C” Cameron sang about women, drinking and getting to tomorrow. The band glided easily between genres, offering finger-wagging gospel in “Take Me to the Water” and something akin to old school rock in “Sweet Bad Meena.”

The first act to perform Friday night, the band began performing for fewer than 20 listeners at the College Square stage. By the end of 40 minutes, however, the crowd had nearly tripled as food stall wanderers and chariot race attendees were drawn toward Big C’s orotund voice.

But one of Big C’s strengths is that he knows when to sing and when to listen.

Between lamenting the “gospel in your heart and blues in your head” and promising that “in the morning time, everything gonna be all right,” Big C knew when to clap, when to scat and when to let the lap steel and guitar speak. The result was a dancing, clapping, hollering crowd.

And of course, this singer knew how to get Athenians’ attention.

Toward the end of the set, people were shouting “Hallelujah” along with him, but Big C’s first attempt at involving the audience was what he called “alcoholic participation.” “I ain’t drunk,” he would cry with a toast from his water bottle — “I’m just drinking,” the crowd would respond.

The end of the set left audience members calling out for more, but Big C had to pack up for The Corduroy Road, which met an already-pumped crowd that just grew bigger until The Whiskey Gentry took the stage.

Big C & The Velvet Delta is different from the fiddle and banjo makeup often associated with Americana music, and its performance Friday was a possibly needed break from country. The band immersed listeners in the sounds of the blues and prepared them for the rest of the festival.

This is a part of the Athens Americana Music Festival. Here is a full schedule of the festival's events.

All good things must come to an end.

This weekend, The Melting Point will host a jamming closing party for the Athens Americana Music Fest on April 2 at 7 p.m. — a perfect oasis for those terrified of the terrifying physical activity at the Twilight Criterium.

Energy drink Red Bull held one of its signature events, the Chariot Race, on Clayton Street in Athens, Ga., on Friday, April 26, 2013.

The Twilight Americana Music Festival will be in full swing Saturday night.

Leon Russell’s music fits into a genre of its own.

Whether competing in the races or spectating from the beer gardens, hunger will strike at this weekend’s Athens Twilight Criterium.

Here is a schedule of the Twilight Criterium events for the weekend.

The sixth Annual Twilight Americana Festival will take place downtown  from April 24-28 and will feature some of the Southeast’s best folk, bluegrass and country music at various performance venues.

Even though things weren’t entirely set up yet when I visited Friday afternoon, the Twilight Criterium food court is ready for the crowds this weekend.

If there is one thing that Slightly Stoopid does not lack, it is stage presence.

Don Chambers is a talented musician, there’s no doubt about that.

Turn Me On!: 'Doctor Who' has a few good moments, but not enough

Roughly halfway through this season of “Doctor Who,” it’s become clear that this is now a show composed of moments rather than stories.