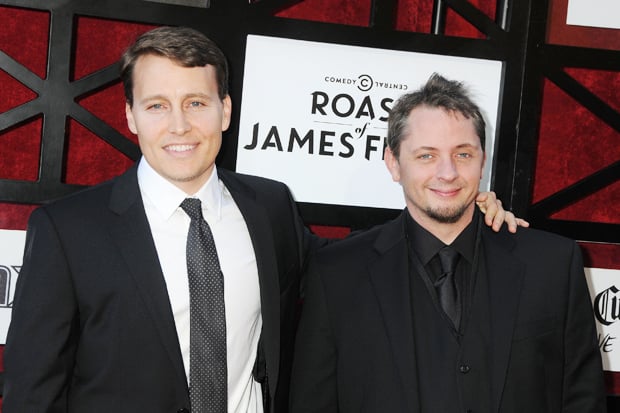 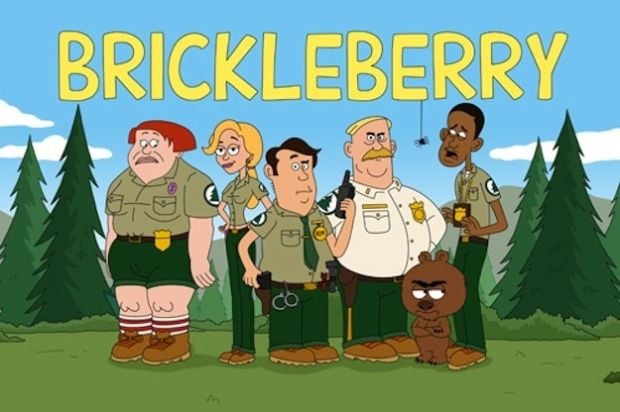 Unlike other Comedy Central cartoons, "Brickleberry" doesn't tackle hard topics in shifts, but takes satire and crassness on all at once. Courtesy Comedy Central

Unlike other Comedy Central cartoons, "Brickleberry" doesn't tackle hard topics in shifts, but takes satire and crassness on all at once. Courtesy Comedy Central

“We’ve been craving Barberito’s,” said Waco O’Guin, a University of Georgia graduate and one half of the duo behind Comedy Central’s “Brickleberry." “If someone could pack some Barberito’s burritos and drive or mail them to us, we’d appreciate it.”

But for O’Guin and his “Brickleberry” co-creator and fellow UGA grad Roger Black, there are some benefits to their new environment — and not just that their adult cartoon, which follows a group of self-important but ultimately ridiculous park rangers working in a National Park on the verge of shutdown, just got picked up for a second season on Comedy Central.

“We went to the Franco roast and got drunk,” O’Guin said. “We got to meet Sarah Silverman, but don’t remember because we got hammered.”

Black and O’Guin began their comedy careers while they were still students at UGA in 1998.

The duo’s sketch comedy show, The DAMN! Show, was the pre-YouTube version of a viral hit. While it was ultimately removed from the University Housing Channel,  the show gained popularity at UGA as well as on other Southeastern college campuses, and word-of-mouth led to their sold-out performance at the Georgia Theatre in 2001.

All the attention led to Black’s signature creation, the character Yucko the Clown, being invited to appear on the Howard Stern show.

The DAMN! Show morphed into “Stankervision,” a sketch comedy show for MTV2 that aired for one season in 2005.

“Our favorite thing to do was doing live action sketches,” O’Guin said. “It was a lot more fun than a live-action cartoon, being in front of the camera dressing like insane characters.”

Despite the short lifespan of “Stankervision,” O’Guin and Black weren’t discouraged from the world of television. In 2011, they began work on “Brickleberry."

The journey to getting a show on the air can be stressful, even for a comedian.

“You walk into a room and have execs staring at you across the table and it’s like you’re speaking another language,” Black said. “They don’t laugh at anything you say, they just stare at you. You start to sweat; it’s the worst.”

The adult cartoon, which was inspired by O’Guin’s father-in-law, a real-life park ranger, saw some changes from the time it was conceived to the time it went on the air.

“It actually started out live action, like a single camera comedy like ‘Reno 911’ in a park, but when we wrote the first version of a pilot, we had cars flying off cliffs, animals dying, and it would have cost like $10 million to make,” Black said. “Someone said, 'Let’s try animated,’ and Waco and I were always huge fans of animation.”

Daniel Tosh, who executive produces the show and voices the character of Malloy, an orphaned grizzly cub with an especially crude sense of humor, also made some changes when he came on board.

“Originally Malloy was Scottish before Tosh was involved,” O’Guin said. “He was an evil Scottish bear who wanted to kill everybody, and that didn’t work at all, but bringing [Tosh] into the cast fits perfectly. We’re really lucky to have him involved in our show. He’s got such a huge fan base too, mostly college students, and that’s what we’ve always catered to was college students.”

While the show is a comedy, writing it on a day-to-day basis isn’t all laughs.

“Writing is hell on earth,” O’Guin said. “It is the hardest process and probably the hardest thing we’ve ever done as far as comedy in our careers. Our first season we had to write 10 22-minute episodes, and that means six months, seven days a week, 14-hour Saturdays, 14-hour Sundays to get all this stuff done. It’s tough, no fun.”

O’Guin also voices the character Bobby Possumcods, a redneck whose persona was translated from The DAMN! Show to the small screen.

Black still appears on the Howard Stern show and performs some stand-up. In addition to writing for "Brickleberry," he also provides the voice for lesbian park ranger Connie Cunaman.

“I was driving through McDonald’s and wanted to switch places with people working there,” Black said. "But it turns out pretty good. [The episodes] turn out funny somehow.”

Both insist the long hours are worth it.

“The fun part is when you’re done and when it comes back, and you get to see people laughing at it,” O’Guin said.

In terms of the future, the duo is hoping for a third season of “Brickleberry” to be picked up by Comedy Central.

“Really we just want to keep doing the show as long as we can,” O’Guin said. “It’s so impossible to sell anything, it’s like hitting the lottery, and we were lucky enough to have that happen twice, but it took us from 2005 to 2011 to get another show on the air.”

The duo is (somewhat) prepared to focus on the antics of the “Brickleberry” gang far into the future.

“I think we can do 20 seasons and be happy, but it would kill us,” Roger said.

Black and O’Guin would also consider returning to the Georgia Theatre with The DAMN! Show — if they thought anybody would show up.

“The problem with Athens is we’ll have a huge following and sell out, but every four years everybody’s gone,” O’Guin said. “But we love doing it, and if we have a break any time, and we thought anybody would show up, we’d be happy to do a show at the Georgia Theatre. We love that place.”

Whatever the future of "Brickleberry" holds, both Black and O'Guin have gone a long way from their beginnings as two underground comics with high aspirations.

“We knew this was exactly what we wanted to do,” O’Guin said. “That was always the goal, to have a show on Comedy Central. I guess we were naïve to think it actually was going to happen. It only took 12 years. So kids, there’s the lesson for you: 12 years of heart-aching, eating ramen noodles and Barberitos, and it can happen.”

"Brickleberry" shows on Tuesdays at 10:30 p.m. on Comedy Central.

Three weeks from today Athens will host the fourth annual AthHalf Marathon. Runners from all over Georgia, and even some from out of state, will converge on Athens on Oct. 20. With the race quickly approaching, it is time for participants to hit the road and focus in on their training.

9 Albums to listen to this October

Long after the atrocities of war have ceased, a horrific legacy still remains.

Eat Up!: Baking basics for the novice

Any baker needs to have the basics down. And, if you're not a baker, these simple starter recipes will having you passing as a pro in no time. The three essential recipes in a baker's repertoire are as follows.

An almost 200-year-old disagreement has led to the creation of a rivalry brew just for this weekend.

A few years after finding a permanent home, one church is already looking to expand.

Turn Me On!: 'Brooklyn Nine-Nine' comes off the bench

It took three episodes, but “Brooklyn Nine-Nine” has finally come together.

Turn Me On!: Schmidt faces love triangle in 'New Girl'

While nothing to write home about, this week’s episode of “New Girl” ties up one of the biggest loose ends left dangling from the season finale ― the conclusion to the Schmidt/Cece/Elizabeth love triangle.

This week is a slow one downtown. It seems that all of Athens runs on the University of Georgia's calendar, and the music venues are taking it slow this week to accommodate for midterms. Although it's test season, we've got a few local highlights showcasing a different side with solo projects and a few newer bands making their names known this week.

On May 5, about two months after the release of "The 20/20 Experience," Timberlake posted a picture on his Instagram that included himself in the studio with a handwritten message: “The 20/20 Experience (2 of 2) Sept. 30th." Sure, Timberlake had made an impressive return with an album recorded under fascinating circumstances, but was another release to accompany it necessary?

UGAMail is getting ready for another makeover.

Have some scoop for our reporters or editors? Want to give an update on your organization or business? Let us know.
© Copyright 2021 RedAndBlack.com, 540 Baxter St Athens, GA | Terms of Use | Privacy Policy
Powered by BLOX Content Management System from TownNews.com.